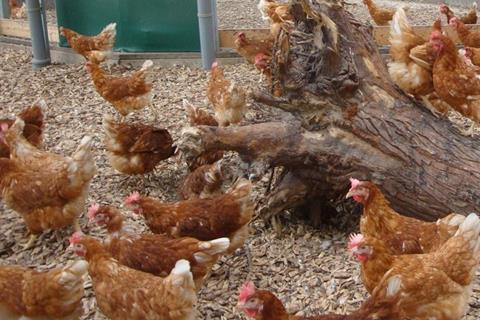 The warning follows a host of commitments by food businesses to switch to only cage-free eggs in their supply chains by 2025. The mass migration from caged systems would facilitate growth in barn eggs, as suppliers looked to barn systems to provide a value proposition, it claimed.

However, the UK currently defers to EU regulations on barn egg systems, which CIWF has dubbed “inadequate” as they do not limit colony size or stocking densities, nor stipulate a provision for enriching the hens’ environment.

The charity called on the British Egg Industry Council to set standards for British producers, incorporating secluded nest boxes, hygienic flooring and freedom to move and perform natural behaviours such as perching, scratching and foraging.

“The British Lion quality scheme is the obvious contender to set this minimum barn egg standard as they currently assure caged eggs and default to minimum EU legislation for barn,” said a spokeswoman for CIWF.

“As companies assess which cage-free system to adopt, now is a prime opportunity for Lion to set a new standard with their members - one that the whole industry can support and one which will ensure consumer acceptability into the future.”

The BEIC confirmed its subscribers met yesterday (15 May) to “discuss the relative merits of various barn systems”. However, the assurance scheme is yet to reach a final decision and said the matter was still being being further considered.