Brexit set to 'bring billions of battery eggs to the UK' 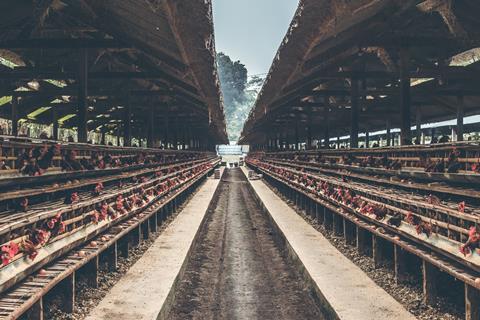 A no-deal Brexit would open the floodgates to eggs produced in battery cages if no import tariffs were imposed, Compassion in World Farming and the British Egg Industry Council have warned.

Barren battery cages, which confine laying hens to spaces smaller than an A4 sheet of paper, were outlawed in the UK by the European Commission in 2012 under the Welfare of Laying Hens Directive.

UK producers will still be prevented from using the production method after Brexit, but the BEIC and CWIF fear that unless the government imposes tariffs on eggs and egg products, there will be nothing to stop imports of cheap battery caged eggs from non-EU countries, including the USA, Ukraine, India and Argentina.

Slamming the government’s refusal to confirm whether it would impose tariffs on the import of foreign eggs and egg product, the BEIC said it was “urgently seeking assurances” over the issue.

“It would be a national disgrace if the government were to remove tariffs to allow eggs into this country which do not meet even the most basic of welfare standards,” said chairman Andrew Joret.

“Giving the green light to foreign eggs and egg products, produced in countries where there is no national legislation for laying hen welfare standards, and that are quite rightly outlawed here is an insult to British consumers and simply can’t be allowed to happen. There is a very real risk that we will end up importing eggs from countries where hens have less than 400cm2 of space each – which is far less than when we banned battery cages in 2012.”

Conditions in barren battery cages caused immense psychological and physical suffering as a result of lack of exercise and not having the space to behave naturally, according to CIWF.

In the UK, battery cages have been replaced by enriched cages, which have more space, a nesting area, litter for scratching and perches for the hens.

However, any move to allow battery eggs into the UK would undermine efforts by British farmers to improve welfare, said chief policy advisor at CIWF, Peter Stevenson.

“If the government fails to protect UK farmers from cheap, low-welfare imports, it will be impossible for it to honour its commitment to using Brexit to achieve gold standard levels of animal welfare,” he said.