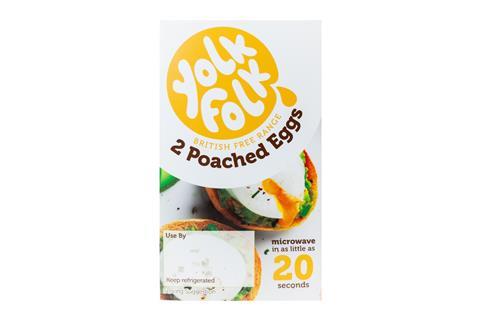 The supplier said the product guaranteed a poached egg ’with an oozy, golden yolk every time’

Freshpak Chilled Foods has launched what it is claiming is a solution to one of the culinary world’s biggest problems: cooking the perfect poached egg.

The supplier’s solution is its new Yolk Folk brand, a chilled two-pack of part-cooked British free-range eggs, which will go on sale in 818 Co-op stores by the end of June and can be microwaved in 20 seconds (rsp: £1.25).

The product was the result of two years of scientific research and development, said Freshpak, with the eggs going through a 20-plus stage process of cooking and cooling to ensure the whites were fully cooked, while the yolks were pasteurised and remained soft.

After microwaving the eggs, shoppers could expect a poached egg “with an oozy, golden yolk every time”, it said, with “no more fuss and faff”.

The product’s creation followed research for Freshpak last year which found that 65% of shoppers struggled to cook a perfect poached egg every time. This came despite there being 365 million poached egg usage occasions in the UK last year [Kantar].

Yolk Folk is not the first time suppliers have attempted the tricky feat of making eggs easier to prepare. While brands such as the Happy Egg Co have launched ready-made scrambled egg variants in recent years, other innovation has been harder to achieve.