Jolly Hog moves into chicken with launch of new sausages 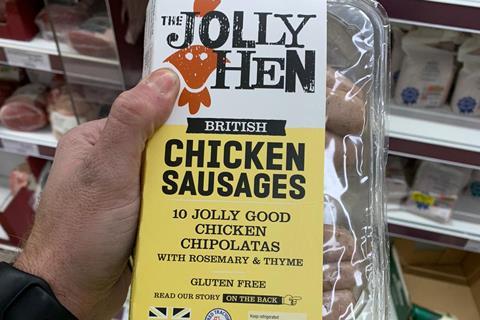 The sausages will be on sale in Tesco, Waitrose, Co-op and Ocado by May

West country-based pork brand Jolly Hog has expanded into a new protein for the first time, with the launch of a new chicken sausage line.

Its Jolly Hen chipolatas with rosemary, thyme and a hint of lemon started rolling into Sainsbury’s last week (rsp:£3/340g) in packs of 10 sausages.

The product is due to roll out across other retailers such as Tesco, Waitrose, Co-op and Ocado between now and May, by which point “we’ll be almost fully national with them, which is exciting”, Kohn added.

The brand has also relaunched its smoked bacon medallions after a three-year gap (rsp: £3/160g, six-pack), which is available now in Sainsbury’s and will roll out nationally across the above retailers over the next few months.

As with the rest of the Jolly Hog range, the medallions were made using outdoor-bred British pork. Both the chicken sausages and medallions were ideal for a lighter breakfast or brunch, Kohn added.

The brand’s move into chicken is the latest in a growing line of similar moves by other major sausage brands such as Heck, the Black Farmer, Richmond and G White & Co in recent years.