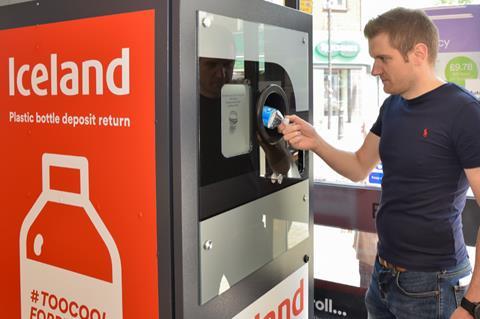 Iceland has claimed almost all its shoppers believe DRS should be extended to all retailers, after it announced it has recycled more than a million plastic bottles since it introduced the system.

The supermarket, which became the first retailer to begin trialling reverse vending machines in some of its stores in May last year, claimed 96% of the shoppers it surveyed believed the scheme should be extended to all retailers.

The move comes with the UK government poised to follow Scotland’s lead in pushing ahead with a DRS system for all glass and plastic bottles, despite major opposition from some retailers.

The bottle return data and customer insight was taken from Iceland’s five stores that had reverse vending machines installed during the past year: Fulham, Mold, Musselburgh and Wolverhampton in May-June 2018, and Belfast in January 2019.

Another trial at The Food Warehouse in Wolverhampton ended in July 2019, when a new machine was installed at the Iceland store in the Merrion Centre, Leeds.

Iceland said its customer insights showed the main motivation for people using the reverse vending machines was environmental concerns, with two-thirds (67%) choosing this option above any others.

It said two-thirds of customers used the machines at least once a fortnight, and 75% believed the introduction of 20p deposits on plastic bottles would be a good idea.

“The results from our reverse vending machine trials highlight the growing demand from consumers to have a deposit return scheme introduced across the UK,” said Iceland managing director Richard Walker.

“Iceland was the first retailer to trial reverse vending machines and we believe the customer feedback we have received shows that our simple model of accepting all sizes of plastic drinks bottle - and extending this to include drinks cans - is the only sensible way to roll out a deposit return scheme nationally.