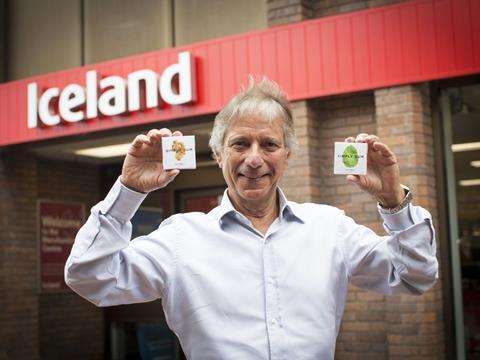 Iceland has introduced the first plastic-free chewing gum from a UK supermarket as part of its pledge to reduce its use of plastic.

With the primary ingredient of most chewing gums being a non-biodegradable substance made with synthetic polymers, plasticisers, softeners, texturisers and emulsifiers, over 100,000 tonnes consumed annually, and councils spending around £60m each year cleaning it off the UK’s streets, Iceland has launched a biodegradable version, Simply Gum.

It is made from a tree sap called chicle which is extracted from the sapodilla tree, native to Central America.

The gum can be found in all 900 Iceland stores in the UK and online with an rsp of £2 for 15 pieces. Available flavours are maple, mint and ginger.

“Simply Gum uses the original, natural gum base of chicle and is fully biodegradable,” said Sir Malcolm Walker, Iceland’s founder and executive chairman. “We are delighted to make it available to UK consumers in our stores so that they can have a real choice about what they are consuming and the impact they make on the environment.”

Figures from Iceland, based on a poll of 2,000 adults conducted alongside food psychologist Dr Christy Fergusson, revealed 85% were not aware that regular chewing gum contains plastic and over three quarters said knowing this would make them think twice about purchasing in the future. Around two-thirds also said they would prefer a gum which isn’t made from synthetic ingredients, and nine in 10 have concerns about the damage being done to the environment by plastic. Three quarters said they have actively attempted to cut down of the amount of products they purchase that contain or are packaged in plastic.

Fergusson said: “Over the past several years, consumers have become more conscious when it comes to the products we buy and the impact that our diet and lifestyle choices have on the environment. As a result, we want to know what we are purchasing, so we can make more informed decisions. With the introduction of Simply Gum, Iceland is taking another step forwards to that goal.”

The creator of Simply Gum, Caron Proschan, added: “I created Simply Gum because I recognised a need for a natural gum that was made with high quality, sustainable ingredients. We chose Iceland as our UK launch partner because of this shared commitment to quality and sustainability.”

These commitments include the retailer’s pledge to enable its customers to reduce their single-use plastic consumption, which was announced in January. This has so far included a vow to go plastic-free in its own-label food packaging by the end of 2023 and led to the trial of replacing single-use bags with reusable paper versions at its branches in the Merseyside region.