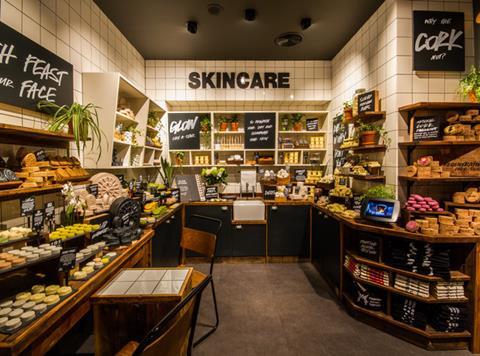 Perhaps Lush took the opening of its new Manchester store one step too far at the weekend. The bare bums were a bit much, frankly.

But at least there was a reason for the nude – and, mercifully, apron-wearing – employees. They were a cheeky nod to the ‘naked’ concept of the ranging: look beyond the glut of glutes and notice a total and utter lack of plastic.

Having last year unveiled plastic-free outlets in Milan and Berlin, Lush has now opened its first UK version (in the north-west in January. Those starkers staff members are to be applauded for their resilience).

The store is an Aladdin’s cave of brightly coloured, outlandishly shaped soaps, bath bombs, cosmetics, face scrubs and shower gels. Yeah, even shower gels. They’re not in scoop-your-own vats but in solid form – some the shape of a bottle – which apparently took Lush several months to get right.

It makes a lot of sense for the retailer to open its ‘naked’ shop. Half the products it sells in its other branches are already unwrapped, and the business certainly has the dosh to invest in exciting concepts. Last year it announced a record turnover of £995m for the 12 months to 30 June 2017, with pre-tax profits up 70% to £73.5m.

Plus, the Manchester launch is a threefold marketing win for Lush, which has underlined its groovy credentials: natural ingredients, no animal testing, 80% vegan portfolio, etc. It’s also generated a raft of positive press (the birthday suits no doubt helped) and made itself even more Instagrammable – handy for a brand that eschews traditional ads in favour of user-generated content.

Opinion: Why recyclable packaging will become a ‘must-have’ in 2019

A plastic-free store can be a beautiful thing, then. However, it helps if the products are already easy on the eye and have a lengthy shelf-life.

Therein lies the difficulty for grocery in getting naked: a lack of plastic means a lot more food waste and hygiene issues. While supermarkets are making great strides in sustainability and the war on plastic, today there’s really only one way to, say, package a raw pork chop without it going manky in minutes.

So, while there’ll hopefully be a lot more ‘nudism’ on the high street, it’ll probably be a while longer before Tesco’s checkout operators go au naturel.