Mixed materials just rubbish when it comes to recycling 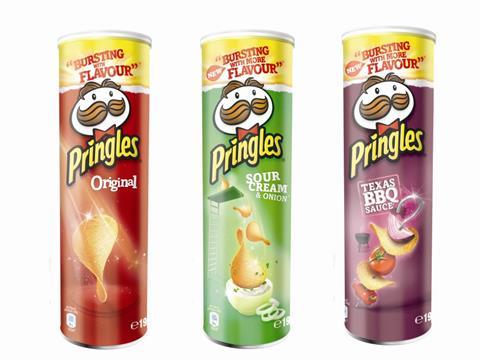 Overnight Pringles has become the recycling world’s public enemy number one. “What idiot designed this?” asked The Recycling Association’s CEO Simon Ellin at a conference last month, before singling out the cylindrical carton as “the worst packaging offender” again to the media last week.

Ellin’s beef with Pringles is its use of mixed materials - a combination of cardboard outer, foil lining, metal base, foil seal and plastic lid - which means they can’t be recycled.

But Ellin didn’t stop there. The “number two villain” was Lucozade Sport for being “over-packaged” due to its “unnecessary” polymer shrink-wrap.

And while singling out no further brands, he highlighted similar issues with cleaning spray bottles (mix of plastics and a metal spring), whisky bottles (glass with metal collar), and black plastic trays.

@Pringles_UK Are plans afoot to change the packaging on a pringles tube?
Current mix of metal and c/board doesn’t recycle well. #recycling

@Pringles_UK have you got any plans to make your packaging more easily recycleable? I love pringles but v disappointed to read about this. 🙁

So how fair and significant are his comments? And what’s to be done?

Both Pringles and Lucozade have defended their packaging. Pringles insists its classic tube, made with 100% recycled paperboard, reduces food waste. “The poly-foil lining is an exceptionally thin layer that protects the crisps from moisture and oxygen, maintaining the flavour and freshness our consumers expect,” says a spokeswoman.

Plus, the plastic cap allows shoppers to exercise portion control, she adds, and the steel ends ensure the product remains intact. “Consumers like their crisps unbroken.”

Meanwhile, Lucozade says “all our bottles are recyclable” and points out it has reduced the weight of the Sport bottle by 3g, “which equates to an annual saving of 540 tonnes of plastic”.

Nonetheless, Ellin’s concerns are hard to ignore. The vast majority of UK recycling materials go overseas for processing - for example, around 61% of the eight million tonnes of paper fibre collected each year. And major markets such as China are rejecting them for being adulterated by metal and plastic, Ellin says. “We’ve got to clean up the material we’re sending them. The quality of what we’re putting in our household bins has to improve radically and quickly.”

What makes Ellin’s argument more powerful is that he isn’t simply anti-packaging. “Companies such as Coca-Cola, Marks & Spencer and Unilever are pioneers in improving the sustainability of their products and ensuring the packaging can be recycled once used,” he says.

He’s not an isolated voice. Thom Newton, CEO of the Conran Design Group, believes: “Without an innovative supply chain, too much responsibility is placed at the end - on waste management and recycling. The design process can ensure few or no non-recyclable materials are used.”

Sarah Wade, strategy director at brand design consultancy Holmes & Marchant, says the benefits would be two-fold. “Designing packaging that makes the process as streamlined as possible will not only encourage more people to recycle, but will result in less contamination of recycled waste.”

A change to the law?

But she doubts anything will change in the absence of legislation. “Irresponsible packaging producers will continue to survive as long as they are allowed to by lax guidelines that aren’t enshrined in law. ”

There are already rules set out in the Packaging (Essential Requirements) Regulations 2015, which brought an EU directive into force. But, in the simplest terms, it requires manufacturers only to make efforts to be recyclable, says environmental lawyer Lee McBride of Gowling WLG. “I would encourage the incoming government to look closely at existing packaging laws and regulations with a view to making changes to ensure that product packaging is more easily recyclable.”

A change in law would rely on extra funding for enforcement bodies, and the penalties would need to be serious deterrents to lawbreaking.

Neil Hughston, CEO of the Duke creative agency, advises Lucozade and Pringles to “move quickly and be very public about how the packaging will be changing to be more easily recyclable”. But he’s not convinced they will listen.

“This of course would come at a cost to their bottom line, and the question is: are they prepared to sacrifice some of it? My suspicion is no.”