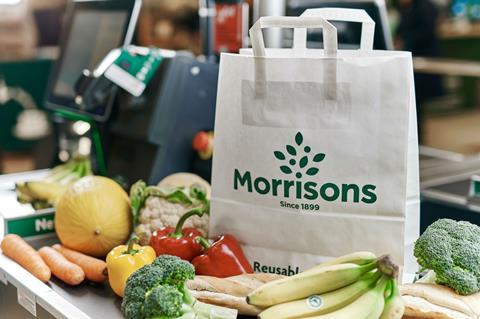 Morrisons is introducing paper carrier bags at all of its checkouts, in a move it claims will save around 1,300 tonnes of plastic a year.

The move follows a successful eight-week trial at eight Morrisons stores which launched in January.

Morrisons stores in Wales will become the first to offer the bags, as from next week, and they will roll out to all stores in May priced at 20p.

The retailer said the bags had proved very popular with customers in its trial.

The paper used is made from sustainably managed forests in Wales and can carry up to 16kg. They can be reused and recycled and are labelled ‘reusable paper bag’.

The 20p price tag is the same price as a Morrisons standard plastic carrier bag.

“We are taking another meaningful step that will remove an estimated 1,300 tonnes of plastic out of the environment each year,” said group customer and marketing director Andy Atkinson.

“Our customers have told us that reducing plastic is their number one environmental concern so introducing the paper bag across the nation will provide another way of reducing the plastic in their lives.”

The latest move by Morrisons is part of a raft of measures it has taken to reduce the use of plastic in the past year. These included removing single-use 5p carrier bags, which led to a 25% reduction in overall bag sales, changing all loose fruit and veg packaging so it is sold in paper rather than plastic bags, and enabling customers to bring their own containers to Morrisons’ butchers and fishmonger counters.