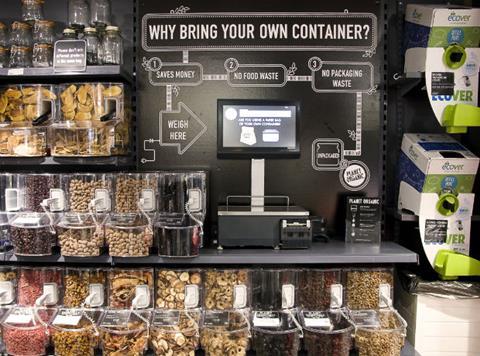 Planet Organic, which has seven London stores, introduced an Unpackaged concession at Muswell Hill in 2015 and has now rolled the dispensers out to Torrington Place, Bloomsbury and to Westbourne Grove.

Customers fill their own containers and weigh them out before paying,

Peter Marsh, chief executive of Planet Organic, said: “We will be looking to install in the other stores later this year as soon as we can make the space available.”

Marsh called it “a zero-waste retail concept” with “‘conscious shopping’ very much the future”.

Catherine Conway, Unpackaged’s founder, stressed the offering was different to “bulk” shopping, which was still found around the UK but did not deal with the issue of packaging waste. With bulk, the customer was offered alternative packaging - often plastic bags - whereas refill shopping was all about enabling customers to bring their own containers, she said.

“To do this, we deduct the weight of any container from the overall weight of the goods they are buying, so it’s self-service, easy to use, and complies with all legislation on weights, measures and labelling.”

She described the system as “a massive step in the long journey towards a truly zero waste weekly shop”.