Plans for bottle DRS delayed for a year amid coronavirus chaos 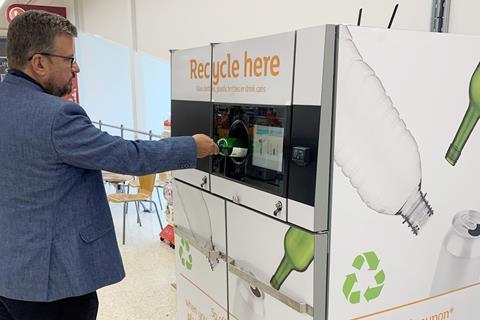 Controversial plans for a bottle deposit return system have been put back by at least a year because of the Covid pandemic, The Grocer can exclusively reveal.

The government, which has faced huge pressure from retailers to delay DRS because of the cost of installing reverse vending machines, as well as the practicalities of refitting stores during the pandemic, has said it will now be 2024 before the system is implemented.

Industry sources are split in their response to the delays, with retail and wholesale bosses welcoming the delay, while drinks suppliers warned it risked chaos with a system in Scotland due to go ahead in 2022.

The Scottish government pushed back its plans for the rollout of DRS after admitting it faced an “impossible” timeframe because of the coronavirus outbreak. However, it still plans to launch DRS in the country in July 2022.

Chancellor Rishi Sunak’s National Infrastructure Strategy, published last week, said the government’s “far-reaching reforms” under its Environment Bill would include “extended producer responsibility (EPR), a deposit return scheme, and consistent collection of food waste and recycling – which will increase resource-use efficiency and cut greenhouse gas emissions from their implementation in 2024”.

An industry source said: “DRS in England has now been pushed back to 2024. It is good news for retailers who had been warning of the infrastructure costs and how this could be done given the pandemic but it increases the chance of having a chaotic two-tier system between England and Scotland.”

However, another source involved in talks said: “It’s good news because we can see how it works in Scotland and use the learnings from there. Having to implement something like DRS while grappling with Covid and Brexit would have been difficult.”

A retail source added; “Ministers are now talking about a 2024 rollout. This is a sensible move as we have long argued that the timeframe being suggested was unreasonable.

“As well as the huge cost of introduction, there are major issues involved with getting the infrastructure in place in store, with tens of thousands of reverse vending machines needing to be installed in a climate which at the moment is not practical because of the pandemic.”

The Grocer revealed in August that the timeframe for DRS was coming under pressure after it emerged a consultation on the scheme was not likely to begin until at least the start of next year, six months behind the previous schedule.

Industry sources said at the time retailers were “too busy trying to save their businesses” to install DRS machines.