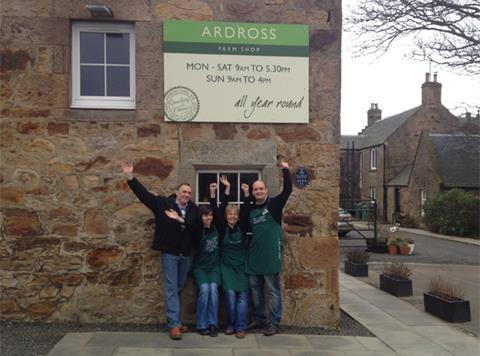 A farm shop in Scotland that offers a delivery service to customers is one of nine regional winners in the 2014 Farm Shop & Deli Awards.

Ardross Farm Shop, in Fife, is the regional winner for Scotland in this year’s awards, sponsored by supplier Olives Et Al.

Ardross offers weekly deliveries to customers for a small charge, tapping into the trend for home delivery offered by the multiple grocery giants. It estimates that 99% of the products sold in its shop are produced in Britain.

The nine regional winners were chosen by BBC Radio 2 culinary expert – and chair of judges – Nigel Barden, and restaurateur Elaine Lemm, who visited each of the winning and commended businesses.

“The hours spent on the road have been amply justified as we’ve been lucky enough to meet some hugely driven, focused and talented individuals championing the absolute best in fresh, local produce that the United Kingdom has to offer. They are huge assets to their regions,” said Barden.

The nine regional winners will join the category winners (announced last month) to go through to the award finals and an overall winner will be announced at the Farm Shop & Deli Show – run by publisher of The Grocer, William Reed Business Media – on Monday 24 March 2014, at Birmingham’s NEC.

The full list of regional winners is as follows.

In addition, 19 businesses were commended.

More information can be found on the Farm Shop & Deli Awards website.