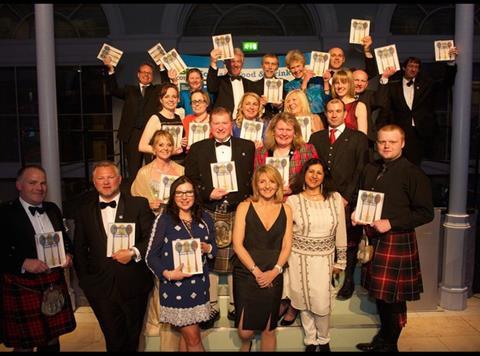 Perthshire chocolatier Charlotte Flower and Edinburgh’s The Scottish Salmon Company were among the top winners at the Scotland Food & Drink Excellence Awards, held last night (27 May) at the National Museum of Scotland.

The event was held just hours after Scotland’s cabinet secretary for food Richard Lochhead announced that Scottish food exports had topped £1.1bn for the first time in 2014 – helping make up for a 7% slip in whisky exports announced in April.

Charlotte Flower’s ornately decorated Wild Flavoured Single Origin Chocolate Thins won the confectionery & snacking category, while the judges named one of the three varieties – white chocolate & meadowsweet – as the product of the year.

It beat other category winners including the Isle of Skye Sea Salt Company, AG Barr, and Katy Rodger’s Artisan Dairy, which won both the dairy and foodservice categories for its Knockraich Crowdie and Crème Fraiche.

Brewdog’s James Watt was named Scottish food & drink entrepreneur of the year, and Jamie Hutcheon of Cocoa Ooze won the young talent award. The final award of the night – outstanding contribution to food and drink – went to siblings Jo and James Macsween, of Macsween Haggis.

“This year’s awards have been a huge success with a record number of entries and our biggest ever award dinner with more than 800 people there to celebrate the sector,” said Scotland Food & Drink chief executive James Wither. “Food and drink is now a national success story for Scotland and the awards let us shine a light on just some of the people and world-class products that are behind that success.”