The Grocer's Adam Leyland is voted BSME Editor of the Year 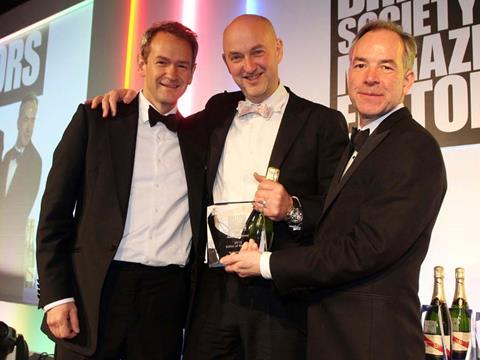 Adam Leyland was voted Editor of the Year at the prestigious British Society of Magazine Editors Awards this week.

In a ceremony on Monday night hosted by Alexander Armstrong, The Grocer’s editor won in the ‘weekly/fortnightly’ business magazine category, beating rivals from Architects’ Journal, Dezeen, Estates Gazette, Inside Housing and Nursing Times. It’s the second time Leyland has won this award, having also prevailed in 2009. He was also shortlisted this year in the Columnist of the Year category.

The judges said Leyland “was absolutely at the top of his game, respected by the industry and constantly breaking stories”, with The Grocer’s coverage of Tesco’s financial meltdown, the growth of the discounters and the war on sugar particular highlights.

Under Adam’s tenure The Grocer also relaunched thegrocer.co.uk, introducing a new finance channel and implementing a web-first approach to news.

“It’s a great honour. I would like to dedicate this to my team, whose hard work and brilliance helped make this award possible,” said Leyland. The BSME Awards celebrate magazine journalism excellence across consumer and business magazines, as well as national newspaper magazine supplements.