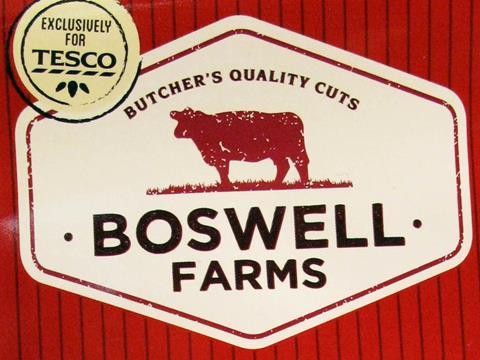 Of all the adjectives used to describe its new own-label fresh foods range, Tesco would have surely not wanted ‘misleading’, ‘fake’ and ‘fictional’.

Yet that’s how the likes of the NFU, the Soil Association and even Scottish food minister Richard Lochhead have described Tesco’s new ‘Farm’ range, warning that the seven new brands - which include 76 new lines under names such as Redmere Farms (for veg), Suntrail Farms (for imported fruit) and Boswell Farms (for beef) - could confuse shoppers as to their provenance and insult their intelligence to boot.

So what’s behind Tesco’s new range? How does Tesco view the widespread criticism? And with the return of tertiary brands to Tesco what does it mean for its own-label branding architecture?

In an exclusive interview with The Grocer, Tesco’s UK & Ireland CEO Matt Davies says the new brands have flowed from customer insight and an effort to serve shoppers better. The ‘Farms’ is a response to a gap in the retailer’s offer, and is designed to give customers “the ability to buy everything they want under one roof” to cover off all quality or value requirements. “I don’t believe there has been a better value or quality proposition in our stores,” Davies adds.

In some cases the new brands are a direct replacement of Everyday Value lines, but “it’s rarely a direct replacement,” Davies explains. “We’ve taken the opportunity to review the specification, formulation and value equation, and to support the clarity and cohesiveness of the overall good-better-best architecture.”

Tesco has used the new brands to relax specifications. “For example, we’re taking some of the smaller apples and the entire crop of lettuce”, says Davies.

As well as reducing waste it means prices can be more competitive against discounter own label products. And Jack Ward, CEO at the British Growers Association believes the new brands could offer opportunities for growers, with “a potentially higher proportion of what’s grown on shelf” also leading to greater volumes.

So the new ‘Farms’ enable Tesco to effectively increase the quality of its entry level range at the same time, adds Porter. And with Tesco pledging to either match or beat competitor prices it appears to have “a lot more clout than its previous attempts to launch tertiary brands”.

As to criticism over the honesty and provenance of these brands, Davies calls them “rubbish”. Tesco is “absolutely committed to sourcing where we can from the UK”, Davies insists. “Look. We’ve been very clear that what we are launching is seven brands. The brands have farm names. The farm names are like any brands, they support the customer’s understanding,” he says. “One farm cannot support the breadth and volume of product Tesco sells. Customers understand it, colleagues understand, we are crystal clear about that.

“It’s bleedingly obvious where the source is. Where we can, we look to source from the UK. But our customers also tell us they recognise there are times where we have to follow the sun. But on the packaging we make it very, very clear.”