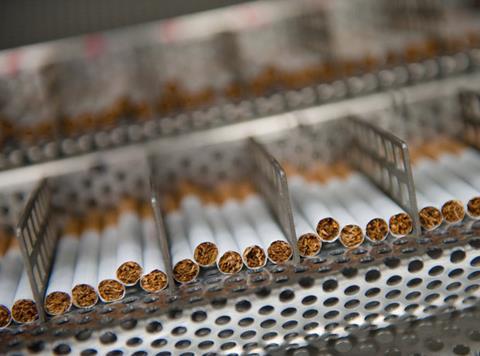 British American Tobacco (BATS) has reported “an exceptionally good performance” in 2016 as it grew revenues, underlying profits and outperformed the industry on tobacco volumes.

Tobacco volumes were down in the Americas (113 billion against 124 billion in 2015) where its acqusition of Reynolds America will boost sales when it goes through.  The deal is expected to close in the third quarter of 2017, subject to obtaining the relevant approvals.

BAT said its market share in its key markets continued to grow, up 50 basis points year-on-year.

Without the adverse transactional impact of foreign exchange and the impact from acquisitions, operating margin would have improved by around 160 bps. On a reported basis, it fell 90 bps to 37.2%.

BAT’s vapour business also grew to become the world’s largest, outside of the US.

Richard Burrows, chairman, commented: “The group delivered exceptional earnings, volume and market share growth in 2016, despite challenging trading conditions persisting in many of our key markets.

“Our results this year demonstrate our ability to continue delivering excellent shareholder returns while investing in the future strength of the business. The 10% increase in our total dividend for 2016 to 169.4p reflects our confidence in our strategy, our people and in generating growth for our shareholders in 2017 and beyond.”

German consumer products group Henkel (HEN) has also reported what it called a “strong performance” in 2016 with sales and earnings at record levels.

Sales were up 3.5% to €18.7bn, which represented a 3.1% increase on an organic basis and was boosted by 6.8% organic sales growth in emerging markets.

Henkel CEO Hans Van Bylen said: “2016 was a very successful year for Henkel. In a challenging market environment, we achieved again new record levels for sales and earnings and met our financial targets for the fiscal year. We delivered a high quality of earnings. For the first time we reached an adjusted operating profit of more than 3 billion euros.”

“In September, we closed the acquisition of Sun Products, which was the second-largest transaction in our company’s history. This marks a major step for Henkel and substantially strengthens our Laundry & Home Care business in North America.”

However, he added: “Based on our clear strategic direction, our strong global team and our innovative brands and technologies with leading market positions, we are well-positioned for further profitable growth.”

For the full fiscal year 2017, Henkel expects organic sales growth of 2% to 4% and its adjusted EBIT margin to increase to more than 17% percent.

Unilever (ULVR) jumped 5.7% yesterday back up to 3,791p after it announced it was seeking ways to return value to shareholders and promised earnings growth would be at the upper end of its 40-80bp guidance.

It said its “comprehensive review of options available to accelerate delivery of value for the benefit of our shareholders” would be complete by early April.

Unilever shares are currently 12.8% higher than their close on Thursday before the Kraft Heinz approach became public.

Other consumer goods groups were boosted by the industry’s growing focus on the bottom line, with Reckitt Benckiser (RB) up 2.2% to 7,229p and Associated British Foods (ABF) up 1.3% to 2,618p.

Hotel Chocolat (HOTC) was up 4.6% to 267p after reporting strong growth in first-half sales and profits thanks to new store openings and strong Christmas trading.

Glanbia (GLB) jumped 7.3% to €18.61 after the announcement it is selling off 60% of its dairy business to the Glanbia Co-operative Society.