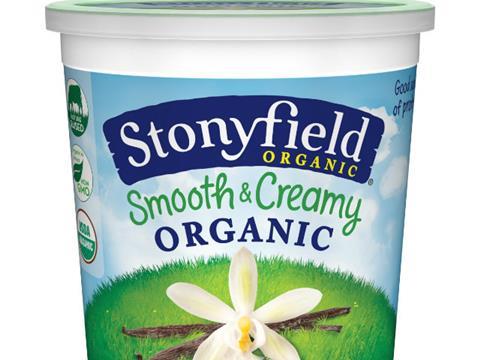 Danone (BN) has agreed to sell US organic yoghurt brand Stonyfield to its French rival Lactalis for $875m (£672.5m).

The sale of one of its US dairy subsidiaries is part of an agreement reached in March with the US Department of Justice (DOJ) to help push through the $12.5bn acquisition of plant-based food group WhiteWave.

Danone purchased a 40% stake in Stonyfield, which generated revenues of $370m last year, in 2001 before taking a majority holding two years later. It is the second largest brand for organic dairy-based yoghurt in North America, with 13.3% of the market [Euromonitor].

The sale price to Lactalis represented a 20 times multiple of Stonyfield’s EBITDA in 2016, according to a short statement from Danone this morning.

Lactalis is one of the largest dairy products multinationals in the world, with more than 607 branded SKUs available in the UK, including Galbani mozzarella, President cheese and Seriously Strong cheddar. It is also the second largest food products group in France, behind Danone.

The sale of Stonyfield is subject to customary conditions, including final approval by the

DOJ, and is expected in the third quarter of this year, Danone added this morning.

The French dairy said back in March that Stonyfield had been “a valued part” of Danone’s portfolio and remained “a highly attractive asset”.

Finsbury Food Group (FIF) has appointed Bob Beveridge as a non-executive director with effect from 1 July 2017. Beveridge, 61, has more than 30 years’ experience in financial and strategic leadership roles at blue-chip companies. He led a number of acquisition processes during his time as group financial director at private label firm McBride. Since then, Beveridge has also held numerous non-executive roles, supporting and advising growth companies. He is a former group finance director at both Cable & Wireless Communications and Marlborough Stirling.

Finsbury chairman Peter Baker said: “On behalf of the board and the wider group, I would like to welcome Bob to the business. Our board is comprised of experts in their fields and Bob’s appointment is a strong addition and one that complements our current strengths. The recent reshaping of the board shows our commitment to having the expertise and capabilities to help build upon our strong market position, drive growth and continue to deliver shareholder value.”

The City is looking busy this week with plenty of big updates.

First up tomorrow is the Sainsbury Q1 statement, including results from Argos. Wednesday brings the Ocado interims, as well as a first quarter update from Booker, which holds its AGM. Sainsbury’s also has its AGM on Wednesday.