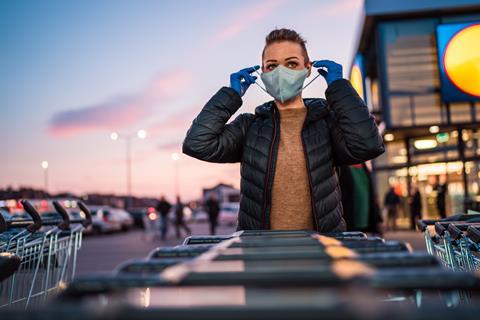 This was boosted by a higher rate of growth than over Christmas period, as the reintroduction of national lockdown restrictions and the closure of cafés, restaurants and pubs saw eating out of the home curtailed once more.

Fraser McKevitt, head of retail and consumer insight at Kantar, said: “We expect to see strong growth for all the grocers fall off as we reach the anniversary of the first national lockdown in March. Sales will then be measured against the high volumes recorded in spring and summer 2020.

“With the vaccine rollout underway, there’s also hope that the hospitality sector will re-open, meaning demand for take-home groceries is likely to subside. Brexit has been another talking point, though steady grocery inflation of 1.3% this month suggests any pricing impact is yet to be felt by consumers.”

Iceland was the fastest growing retailer with a physical store presence, growing at 21.8% during the month.

Notably Morrisons was the next best performer, with growth of 14.3% outstripping dscounter growth with Lidl at 12.1% and Aldi at just 5.7%.

Ocado was the fastest growing grocery retailer overall, with growth of 36.6% edging its market share up to 1.7% from 1.4% in the corresponding period last year.

Convenience stores, including independent corner shops and those operated by the major chains, this month recorded their highest four-week ending share of the market since September at 12.9%.

Co-op is one of the best-established convenience retailers, and it posted a 12-week sales growth of 11.4%.

McKevitt said: “As well as the usual healthy new year’s resolutions, shoppers also looked to treat themselves in January as a way of coping with another month of restrictions. For example, vegan-specific ranges were bought by 6.6 million households this month, a 10% increase on last year, as Veganuary helped sales of those products grow by 23% in the past four weeks compared to 2020.

“Dry January also played a role in increased spend on no-alcohol beer, which grew by 12%. However, many sought to indulge and keep spirits high during a tough winter month and alcohol sales grew overall by £234m, an uplift of 29% on last year.”

The period also encompassed New Year’s Eve – with many people celebrating the night at home instead of going out or hosting family and friends. Kantar said delivery companies such as Just Eat and Deliveroo felt the benefit as more people than usual tucked into a takeaway, and such services accounted for 6% of all online shopping trips on 31 December.

In the four weeks to 24 January, people under 28, who are typically more open to visiting physical shops, increased spending in larger physical stores by 12%. However, over-45s cut back spend in bigger supermarkets by 1%, as the rapid growth of online shopping, which hit a record share of 14% this month, is being driven by the oldest demographics

Just Eat Takeaway.com has announced it has raised €1.1bn of new corporate bonds for “general corporate purposes” and to provide financial flexibility to fund growth.

The delivery company has issued notes in two tranches – a €600m tranche due August 20025 and €500m for notes due February 2028. The convertible bonds will convert into ordinary shares of the company at those times.

The offer was upsized from an initial €1bn due to demand.

Just Eat Takeaway.com said the issue will “provide the Company with financial flexibility to act on strategic opportunities which may arise”.

Elsewhere, The Hut Group has confirmed the completion of its deal to buy US online retailer Dermstore.

It agreed a deal to buy the beauty retailer from retail group Target for US$350m in December.

Matthew Moulding, executive chairman and CEO of THG commented: “We are delighted to welcome the Dermstore.com team to THG and accelerate our ambition to be the global digital partner of choice across the beauty industry.

“THG’s acquisition of the US number 1 pure-play online prestige skincare business means over 20% of the group’s sales are now within the US, presenting an exciting opportunity to further scale the wider group in a key global market.”