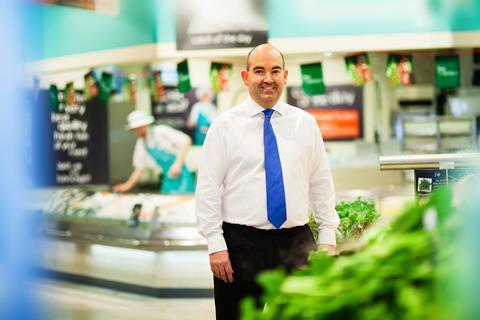 Strain, who replaced commercial director Darren Blackhurst as chief commercial officer in October, having been finance boss since 2013, has played a “pivotal” role at the retailer, according to CEO David Potts who made the announcement today.

trading director at Morrisons since 2017, responsible for ambient grocery, frozen, dairy, fuel and services and has nearly 30 years of financial and commercial experience.

Potts said he had played a leading role in Morrisons work to become more competitive and improve relationships with suppliers.

Potts said: “These two appointments are a result of strong management development plans at Morrisons and I am delighted that we are promoting two highly capable colleagues from within the team. I look forward to continuing to work closely with both of them.

“Trevor is a proven and outstanding business leader who has played a pivotal role in the ongoing Morrisons turnaround. Michael has extensive financial, commercial and retail experience, together with a first-class track record, and his appointment will further strengthen the executive team. Together, and as part of the wider Morrisons team, we will continue to build a broader, stronger Morrisons.”

During the year to 30 September, Stock Spirits posted underlying volume growth of 8% and a 10.1% jump in revenues on a pro-forma constant currency basis to €308.4m.

Sales growth was driven by a 14% jump in revenues from Poland, where it has completed a turnaround and has now posted 29 consecutive months of year-on-year volume share growth.

Along with the results, the company has announced an investment of €25m in additional distillation capacity in Poland, to be completed in three years’ time

Elsewhere, it consolidated its market leadership position in the Czech Repubic, with underlying revenues up 10% on a constant currency basis as it took share in both volume and value.

Overall revenue per litre in the 12 month period was €2.42, up from €2.37 last year, reflecting the progress in improved sales mix and pricing as it focussed on premiumisation.

During the year it completed two acquisitions: Distillerie Franciacorta, a leading grappa, spirits and wine business in Italy; and Bartida, a high-end on-trade spirits business in the Czech Republic.

It was forced to take exceptional charges of €11.7m, primarily driven by €14.3m writedown of brands in its Italian business.

CEO Mirek Stachowicz commented: “We have delivered a year of good growth as our successful strategy of premiumisation continues to make progress. The turnaround of our Polish business is complete, and we have now delivered 29 consecutive months of year-on-year volume share growth in that market. We have also strengthened our leadership position in the Czech Republic, taking market share in volume and value.

“We continue to assess a range of M&A opportunities following our successful acquisitions this year of Distillerie Franciacorta in Italy and Bartida in the Czech Republic, and are committed to pursuing a strategy of both organic and inorganic growth in order to deliver further shareholder value in future.

“We are also pleased to announce today an investment in our distillation capabilities in Poland, which will bring future value to our business through cost reduction.”

The FTSE 100 sank 1.8% to 7,158.8pts, suffering its worst single day in two months on renewed concerns about the trade situation between the US and China.