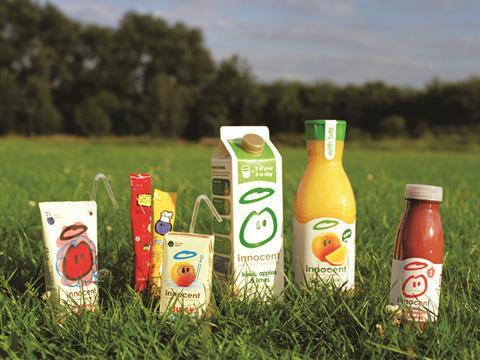 Profits have plummeted at smoothie maker Innocent Drinks as its exit from food products hit trading.

In a “challenging” UK juice market, sales continued to grow at the Coca Cola-owned drinks firm, with currency adjusted UK and European revenues up 18.2% to £258.8m, despite exiting the food category in April 2015, which wiped £7m-£8m off revenues. “For the long term it was definitely the right thing to do,” said CEO Douglas Lamont of the decision to abandon veg pots, as it “enabled focus on new growth areas”.

He added the profit loss followed major investments in European markets and NPD over the past 12 months in line with his brief to reinvest all discretionary profit to grow the business.

The prospect of Brexit continues to weigh on the minds of consumers as their negative view of the UK’s economic prospects persists according to GfK’s Consumer Confidence Index.

The index increased two points in May, with all of the measures, except one, used to calculate the Index saw increases this month. However, the index remains in negative territory of -1 as uncertainty around the economy has affected confidence.

Joe Staton, Head of Market Dynamics at GfK, said: “Optimists will point to the fact our views on personal finances and our willingness to make major purchases are all up on last year. But pessimists will emphasise that the music is different when it comes to the General Economic Situation.

“Despite the tiny uptick this month, our confidence in economic matters, whether we look back or ahead 12 months, remains way below last year. Is it because the Brexit gremlins are hard at work? Almost certainly yes. How will that all change when the EU referendum has taken place on June 23rd? We all wish we knew the answer to that question.”

The index found views of the general economic situation were at -13, which is 14 points lower than May 2015.

Elsewhere, Neil Sutton is chairman of corporate finance at PwC has written a column for The Grocer looking at whether the recent Hotel Chocolat IPO will spark increased IPO activity in the food & drinks sector? “The pause button was pressed on European IPO markets in the last few months but hopes remain for 2H 2016 and a strong 2017 flotation pipeline,” he writes.

In the City this morning the FTSE 100 is staying around its month-long high, rising just a point to 6,266.9pts so far today.

B&M European Value Retail (BME) is again one of the notable risers following on from yesterday, climbing another 1.4% to 294.9p this morning.

If Marks & Spencer (MKS) investors had been hoping for a share price rebound yesterday after the 10%-plus collapse on Wednesday they were left disappointed by a further 2.2% price drop to 290.6p yesterday.

The City has reacted strongly to M&S cutting its future profits expectations given the investment in the business needed to achieve its new strategic goals – including the increased rollout of Simply Food stores. There is also disappointment that M&S has put off tackling the thorny question of whether it needs to cut its store estate until the autumn.

There was better news for three other company reporting annual results yesterday,

Tate & Lyle (TATE) continued on the recovery path with its shares up 1.6% to 624p after reporting a 5% increase in full year adjusted profit before tax following a year of major restructuring.