Get ready for the return of inflation 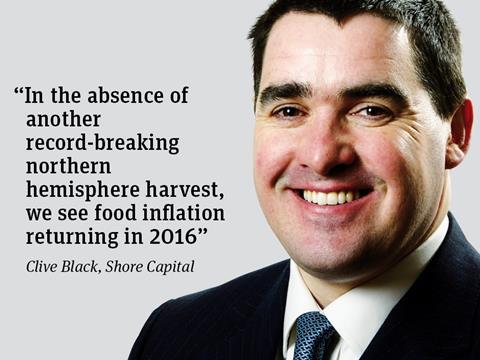 When predicting the grocery world ahead, the one thing to be sure about is that - in the main - one will be wrong. So here goes.

From the high economic skies we see a Britain that continues to grow quite robustly, circa 2% GDP, with living standards expanding robustly at the start of the year but contracting in later quarters as inflation tickles up.

Our inflation expectations reflect an amalgam of soft two-year comparatives for food prices and potentially tighter food commodity markets. Hence, in the absence of another record-breaking northern hemisphere harvest, we see food inflation returning in 2016; the national living wage could also lead to higher retail price rises. We foresee interest rates rising two, maybe three times by the year-end and the trend of falling UK unemployment to end as labour is repriced through the new national living wage.

If there is a referendum on the UK’s membership of the EU then, as with Scotland, expect a hiatus, with a moratorium on business investment around the event; we would be surprised to see the UK leave, but let’s see. The referendum could cause some currency instability for sterling.

Food volumes may start to pick up but the market is set to remain competitive as the superstores sustain their work to be more effective against the discounters. The latter will sustain share growth through new outlets and store maturation. While so, we see potentially improved times for the whole supermarket segment, particularly in the second half. Food eaten out of the home will continue to gain share as will online grocery penetration; we wonder if convenience retailing will be so potent as superstores re-engineer.

More broadly, we believe the health & wellbeing debate will continue to gain the headlines within an evolving public health discussion on obesity. The debate about store-based business rates and whether online retail should have its own taxation can also be expected to gain print space.

Finally, we expect Britain to have a good but not great Rio Olympics, Northern Ireland to win Euro 2016, Manchester United to look for a new manager, and Glasgow Rangers’ return to the Premiership!