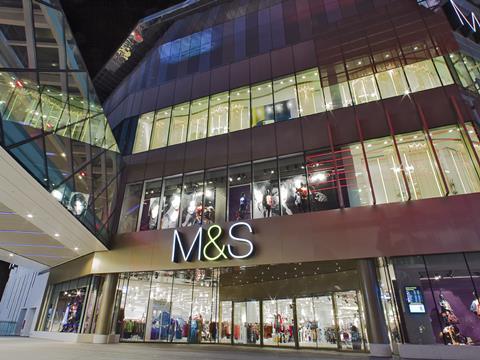 The chairman of Marks & Spencer has told shareholders that the high street chain is on a “burning platform” and may not exist in the years to come if it does not significantly change (The Times £). Marks & Spencer’s chief executive Steve Rowe has refused to rule out further store closures as the company faces “probably the biggest turnaround in UK retail” amid sliding sales (The Telegraph). The chairman of Marks & Spencer has given his starkest warning yet about existential threat faced by the high street giant as he refused to rule out further store closures and job losses (The Guardian). Chairman Archie Norman said the plan to close 100 shops, announced in May, would happen within the next two years. “I can’t tell you it won’t be the last,” he told shareholders. (The BBC)

UK high street stalwart Marks and Spencer invoked the improving fortunes of England’s footballers at its annual meeting on Tuesday, as it pushes ahead with its own reinvention (The Financial Times £). The Times (£) writes: “He may not have worn a waistcoat like Gareth Southgate but the chairman of Marks & Spencer, which has kitted out the England football team with suits, still managed to win over the crowd at the retailer’s annual meeting, held at Wembley Stadium yesterday.”

In his first appearance at Marks & Spencer’s annual general meeting since becoming chairman, Archie Norman had to spend a long time lamenting the retailer’s many past failures and promising shareholders a better future. (The Times £)

Online grocer Ocado has forecast higher costs and renewed losses as it ploughs money into its business of building robot-operated warehouses for other retailers (The Financial Times £). The online grocer Ocado has outlined ambitious expansion plans that include a move beyond groceries into using its hi-tech warehouses to sell clothing and homeware (The Guardian).

Ocado’s top brass and some staff are in line for enhanced bonuses as the online grocer’s share price soars off the back of new international partnerships (The Times £). Ocado’s senior bosses will see their pay packets bulge by millions of pounds this year after a flurry of international deals sent the online grocer’s shares skywards (The Telegraph). Ocado bosses will receive an extra £9million windfall after its share price almost trebled in just a year (The Daily Mail).

Ocado’s share price boom is no indicator of long-term success, writes The Guardian’s Nils Pratley. “The company is worth what investors are willing to pay, of course, but that is taking a lot on trust. Ocado has four automated “customer fulfilment centres” in the UK but is now committed to building 23 overseas. The execution risks must be enormous.” (The Guardian)

Hints that it might find new customers for its technology were enough to quell concerns about a profit dip on Tuesday, writes The FT. “Shares trade as if the company’s conversion to a tech stock is complete. New, clearly profitable deals will be needed to lift its market value further.” (The Financial Times £)

Charles Wilson, head of Tesco’s UK and Ireland business, is to step down from his role to recuperate from throat cancer (The Times £, The Guardian). Tesco UK chief Charles Wilson, who was widely tipped as a successor to the supermarket’s chief executive Dave Lewis, is to move to a less high-profile role within the company after being treated for throat cancer (The Telegraph).

The FT quotes one analyst who noted: “Businesses the size of Tesco require substantial human capital and CEO Dave Lewis has materially rebuilt this capability through his tenure”. He was able to promote chief product officer Jason Tarry out of numerous candidates. (The Financial Times £)

Gavin Darby, chief executive of the UK’s Premier Foods, has come under renewed pressure after Oasis Management, the activist investor lobbying for his removal, revealed on Tuesday that it had doubled its stake in the Mr Kipling cake-maker (The Financial Times £). The fund manager said it had “confidence” Mr Darby “will no longer be chief executive of Premier Foods” at the conclusion of the company’s annual general meeting next week (The Telegraph). Hedge funds now own 23% of Mr Kipling owner Premier Foods after tycoon seeking to oust boss doubles his stake (The Daily Mail).

Administrators appointed to discount chain Poundworld will close 25 stores, resulting in 242 job losses, the retailer said on Tuesday. The stores named for closure will operate until July 15, according to a memo sent to Poundworld staff by its administrators, Deloitte (The Times £, The Financial Times £, The Telegraph, The Guardian, The Daily Mail, The BBC).

A director who once gave the green light to one of the most catastrophic mergers in British corporate history is being lined up as chairman of J Sainsbury as it attempts to sell its planned marriage with Asda to investors. (The Times £)

PepsiCo shares rose in premarket trading after the beverage and snack maker increased revenue faster than forecast in its second quarter and said it was sticking with its full-year financial targets (The Financial Times £). Pepsico’s beverage sales in North America fell for the fourth straight quarter but the company’s global battle for supremacy with its rival Coca-Cola in pricing and marketing, using World Cup footballers such as Dele Alli appears to be paying off (The Times £)

Diageo has outlined plans to tighten its grip on a Chinese drinks maker whose distillery dates back more than 600 years. The British drinks giant, whose brands include Guinness and Smirnoff, wants to raise its stake in Sichuan Shui Jing Fang (SJF) from 39.7 per cent to 60 per cent. (The Daily Mail)

Juul Labs, the San Francisco-based ecigarette company, has closed on the first $650m of a $1.25bn funding round, new regulatory filings show. The Ecigarette maker spun out only last year worth half market cap of big tobacco group Imperial. (The Financial Times £)