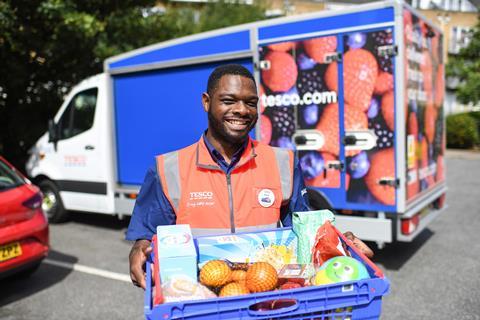 A boom in online grocery shopping delivered £1bn of extra sales for Tesco over the holiday period as the supermarket group toasted a record Christmas (The Times £). Tesco on Thursday trumpeted a market-leading performance over the Christmas period. Its success at bagging online sales, but sluggish growth looks set to return for Tesco once it returns some extra cash to shareholders (The Financial Times £). Tesco has hailed a “record” Christmas on the back of booming online sales and customers treating themselves to its luxury Christmas food ranges (The Guardian). Tesco has reported a record Christmas across its business but warned annual coronavirus-related costs are on track to hit £810m (Sky News). Tesco became the latest supermarket to serve up a sales feast over Christmas, but problems on the island of Ireland cast a shadow over the results (The Daily Mail).

The chief executive of Tesco has reiterated the supermarket chain’s commitment to Northern Ireland despite what he termed “teething issues” in supplying stores in the region (The Financial Times £). The boss of Tesco said the supermarket was committed to trading in Ireland despite some disruption to food supply due to Brexit after it posed booming Christmas sales (The Telegraph). Tesco says it has seen some disruption to food supplies in Northern Ireland since trading arrangements with the EU changed on 1 January (The BBC).

Compare Tesco’s can-do attitude to M&S’s over border issues on Thursday, writes Nils Pratley in The Guardian. “We see this as a challenge that needs to be overcome and resolved … but we don’t see it as a crisis,” said the chief executive, Ken Murphy. Both retailers were among the firms that wrote to the government last week to highlight problems, but also you have to wonder whether some big firms were better prepared for bureaucracy. (The Guardian)

The owner of Primark has warned it will lose £1.05bn in sales if its stores are forced to remain shut until the end of February after retail revenues plunged by nearly a third in the run-up to Christmas (The Telegraph). Revenue at discount fashion chain Primark fell 30% over the past quarter, as online rival Boohoo reported soaring sales, in a sign of the sharply diverging fortunes among UK retailers (The Financial Times £). The owner of Primark has warned it faces losing over £1bn in sales if coronavirus lockdowns force the majority of its stores to remain closed through February (Sky News). Primark has said lockdown store closures will mean missing out on more than £1bn in sales, but said it was confident of a resurgence after the Covid crisis ends, promising: “We are going to be back.” (The Guardian). High Street chain Primark suffered as the shutters came down, with 305 of its 389 stores shut due to Covid restrictions, including all 190 in the UK (The Daily Mail).

Far from being a lockdown loser, Primark could bounce back even stronger, writes Ben Marlow in The Telegraph. The bricks and mortar fashion chain has been floored by the pandemic – but it is well-positioned to capitalise on the misfortune of rivals. (The Telegraph)

Scottish seafood companies only have “weeks” to survive without action to ease EU export delays, an industry leader has warned - as the environment secretary blamed “teething problems” due to Brexit. (Sky News)

The proportion of UK businesses currently trading has fallen to 71%, its lowest level since the end of the first lockdown, new figures show. (Sky News)

Lidl has narrowly beaten budget rival Aldi to be named the cheapest supermarket of 2020, according to Which? The consumer group tracked 45 own-label and branded products in eight major supermarkets for at least 100 days. (Sky News)

The Guardian looks at Christmas on the UK high street: where did shoppers spend their money? Tesco, Lidl, Asos and Just Eat all increased sales but Primark, Greggs and M&S struggled. (The Guardian)

Has coronavirus made us more ethical consumers, asks The BBC? Are we seeing an ethical and environmental consumer revolution that is here to stay? (The BBC)

Alec Brummer on Canadian convenience store chain Alimentation Couche-Tard’s £14bn offer for France’s Carrefour writes: “French finance minister Bruno Le Maire’s intervention likely will cool Alimentation Couche-Tard’s enthusiasm, but is largely a straw man. There is no overlap between the Canadian firm’s convenience store and petrol stations and Carrefour at all. The predator is unlikely to sack or move cashiers to North America or substitute Canadian food suppliers for French counterparts.” (The Daily Mail)

The Daly Mail’s Alex Brummer writes on The Compass Group school meals furore writes: “What the senior team should have recognised immediately is how a local political row, involving the country’s least well-off schoolchildren, could blow up in the company’s face badly, damaging the group’s reputation.” (The Daily Mail)