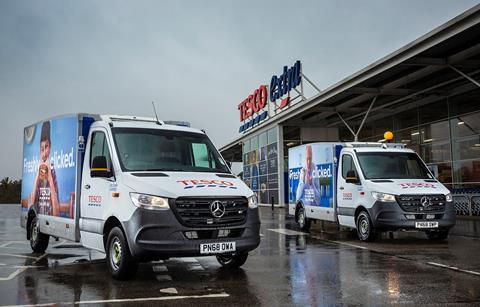 Tesco is planning to offer free delivery on online grocery orders for members of its Clubcard Plus loyalty scheme as an industry price war intensifies (The Times £). Tesco is to introduce free home delivery to members of its premium loyalty scheme, pitching it head to head with Amazon as the US tech firm seeks a bigger slice of the UK’s near-£200bn food and drink retail market (The Guardian).

Almost 300 workers at Britain’s biggest sandwich producer Greencore have tested positive for coronavirus, but the factory in Northampton at the centre of the outbreak is being kept open (The Times £). Nearly 300 employees have tested positive for coronavirus at a factory that makes sandwiches for M&S. The Greencore factory in Northampton, which employs around 2,100 people, said some of its staff are now self-isolating (Sky News).

Workers at a factory in Northampton at the centre of a coronavirus outbreak were told they would be paid less than £100 per week if they had to self-isolate, making it difficult for many to comply, their representatives have claimed (The Guardian).

Retail bosses have made fresh calls for ministers to accelerate a business rates review as the end of the tax holiday looms. Leading voices in the industry, who are part of the Retail Sector Council, have said it is imperative that the Government proceeds with an overhaul of the tax. (The Telegraph £)

Hundreds of jobs are expected to be cut at the sushi restaurant chain YO! as it becomes the latest casual dining chain to propose a financial restructuring to creditors amid the COVID-19 outbreak. (Sky News)

The number of people dining out during the week has surged this month since the introduction of Eat Out to Help Out, bringing in hundreds of millions of pounds for Britain’s suffering hospitality sector (The Times £).

Consumer confidence is picking up sharply as the economy reopens and consumers flock back to bars and restaurants, fuelling hopes of a swift “V-shaped” rebound for the collapsed economy. (The Telegraph)

Patrick Dardis, the chief executive of pub group Young’s, is calling time on working from home. Last Monday, he took an evening stroll through Central London and found the deserted streets such a ‘scary sight’ he is determined to galvanise the Government into getting Britain back to work. (The Daily Mail)

Morrisons is planning to ditch all its plastic “bags for life” following evidence that they are being used once and thrown away. The food retailer is running a trial in eight stores from Monday, which will see sturdy paper bags offered at checkouts instead (The Guardian). The supermarket chain Morrisons is starting trials which could see it ditch all its plastic bags for life (The BBC).

The infamous Turkey Twizzler is making a surprise comeback, 15 years after the manufacturer Bernard Matthews stopped making them after a wave of negative publicity (The Guardian). Jamie Oliver beware: the Turkey Twizzler is back, in what its makers claim is a new, healthier version (The BBC).

Waitrose and M&S fight for Ocado customers, writes The Guardian. When the home shopping service joins forces with the Marks & Spencer empire in September, will its loyal clients stay with it – or substitute waitrose.com instead? (The Guardian)

Marks & Spencer is set to take on the mainstream supermarkets with a major television advertising campaign promoting ‘everyday prices’ on bread, milk and other staples. (The Daily Mail)

Amazon is under pressure to reverse its decision to pass on the cost of a new tech tax to small businesses. The internet shopping giant, which raked in sales of £750million per day in the second quarter, told firms selling goods on its marketplace that it will hike fees in response to the UK digital services tax. (The Daily Mail)

Amazon is creating 1,000 jobs at a warehouse in Nottinghamshire that will help it manage the renewed surge in online shopping triggered by lockdown. (The Daily Mail)

Majestic and Naked Wines prove critics wrong as they thrive after split, writes The FT. Both divisions have been helped by the coronavirus pandemic, as oenophiles have drunk more at home with bars and restaurants closed. Majestic and Naked have markedly different strategies and business models, but both now have high expectations for growth. (The Financial Times £)

However, The Times suggests investors sell Naked shares, writing: “A cloud hanging over any online retailer is whether there will ever be decent profits selling third-party products. And Naked is not immune to the impact of job losses on consumer spending. It looks a good time to take profits and put the cork back in the bottle.” (The Times £)

The country once mocked as a nation of shopkeepers is increasingly moving online. The share of retail sales made via websites, tablets and mobile phones in the UK has risen steadily from about 5% in 2008 — the year the iPhone launched in the UK — to hit 30% in May this year at the height of the UK lockdown, according to the Office for National Statistics. (The Financial Times £)

Following The Grocer’s story last week, The Telegraph writes that AI helps Sainsbury’s halve number of thefts. ThirdEye’s software led to a 50% drop in theft of spirits in the supermarket stores it was used in. (The Telegraph)

Citi, the American investment bank, thinks that the share price of Domino’s Pizza Group looks a little “overcooked” and yesterday it told its clients to take their profits and run. Citi’s analysts are concerned that many of the factors that have driven sales and profits up this year are likely to be short-lived. (The Times £)

The Times looks at how how Steve Easterbrook, the wizard from Watford, cooked up a supersized McScandal. The British boss doubled McDonald’s share price — but the fast-food giant is suing him over alleged sexual transgressions. (The Times £)

Scottish exporters of single malts have been hit hard since caught up in a spat between the EU and US. The US, irked at the subsidies meted out to Airbus — a direct competitor of the nation’s own plane maker Boeing — imposed tariffs of 25% on single malt Scotch whisky in October. Exports to the US have since dropped by almost a third, according to the Scotch Whisky Association. (The Financial Times £)

West Midlands mayor and former John Lewis boss Andy Street launched a stinging attack on his old employer after it confirmed the closure of its vast Birmingham store. (The Telegraph)

It’s typically been the preserve of landlords and property dressers trying to sell a home, but furniture rental could be about to go mainstream. From Monday, high street favourite John Lewis will be renting out sofas, sideboards and desks, as part of the plan to remodel its business announced last month. (The Guardian)

Coronavirus crisis fuels interest in vertical farming, writes The FT. The coronavirus pandemic has been a major worry for many British farmers, threatening access to agricultural labour and complicating international supply chains. But for proponents of indoor farming, the crisis has offered an opportunity. (The Financial Times £)

Sales of vitamin and mineral supplements have risen sharply during the pandemic, boosting consumer goods multinationals such as Nestlé, Procter & Gamble and Reckitt Benckiser that have piled into the sector in recent years. (The Financial Times £)