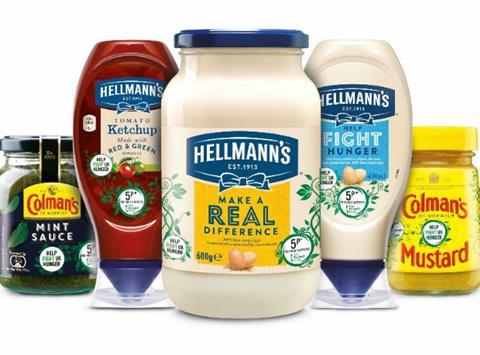 A busy day for food and drink sees the papers packed with stories on Unilever, Morrisons, Sainsbury’s and more this morning.

New products, such as Hijab Fresh, a personal care brand catering for Muslim consumers and mini versions of Magnum ice cream helped to drive sales at Unilever last year as it battled collapsing prices in its most mature markets (The Times £). The hunt for the next blockbuster brand has led Unilever to splash out billions on boutique labels. Where once it was known for household staples, such as Dove, Marmite and Ben & Jerry’s ice cream, it has staged a series of swoops, such as its £2billion takeover of Korean skincare brand Carver Korea last year, and new labels of dry shampoo, vegan mayonnaise and low-calorie ice cream (The Daily Mail)

Unilever says it will complete a review of whether to choose the UK or the Netherlands as its main base “in coming weeks”, as the Anglo-Dutch company seeks to scrap its structure of two parent companies, headquarters and stock market listings (The Financial Times £). All the signals have been that the Dutch will win this battle. An announcement was widely expected today, writes Sky News’ Ian King. “The fact there has not been one suggests Britain is putting up a strong fight to keep this vital business based here.” (Sky News)

Why did Mr Polman not see Unilever’s shares pop at 8am on Thursday, asks the FT? Perhaps because some investors fear his margin target, now that price is growing more slowly than volume, may be like a bottle of Dove foam hanging from a shower rail: presenting a risk of over-reach. (The Financial Times £)

J Sainsbury has bought the Nectar loyalty card business for £60 million to get to know more about its customers (The Times £). Sainsbury’s has forked out £60million to buy the Nectar loyalty card business in a bid to make the supermarket more profitable (The Daily Mail). The deal underlines the strategic importance that big brands now place on data-rich subsidiaries they once saw as lucrative spin-offs (The Financial Times £).

Morrisons is cutting around 1,500 store management roles and creating 1,700 more junior jobs as it becomes the latest supermarket to shake up its workforce as the sector scrambles to adapt to changing shopping habits (The Telegraph). Morrisons is to axe 1,500 middle-management roles in stores as part of plans to cut costs and put more staff on the shop floor and tills (The Guardian). Morrisons to axe up to 1,500 management roles - but will hire an additional 1,700 shop floor workers (The Daily Mail). Workers at threat of redundancy will be encouraged to apply for 800 existing management vacancies (The BBC). The supermarket chain followed rivals Tesco and Sainsbury’s in announcing a restructuring of store operational roles (Sky News).

The British pork and poultry company that supplies premium own-brand sausages for Sainsbury’s and Tesco brought home the bacon for investors yesterday. The shares in Cranswick climbed 160p to £30.98 after reporting that trading had been better than expected in the run-up to Christmas. (The Times £).

The boss of the Scottish soft drinks group that makes Irn-Bru has defended the decision to introduce a reduced-sugar recipe, insisting that the vast majority of consumers would be unable to taste the difference (The Times £).

The UK’s food regulators are launching nationwide review of all meat cutting plants in the wake of “serious incidents” at 2 Sisters Food Group and Russell Hume. (The Guardian).

Dominic Chappell, the former owner of BHS, has been slapped with a £10m bill by pensions watchdogs as they try to recover money owed to the bankrupt retailer’s retirement scheme (Sky News). Dominic Chappell has been issued with a £10 million bill by the Pensions Regulator as officials seek to claw back money for the failed retailer’s pension schemes (The Times £). Former BHS owner Dominic Chappell has been hit with a £10million bill to pump up the failed retailer’s pension schemes (The Daily Mail). The pensions watchdog officially notified the former bankrupt businessman that he would be expected to pay the sum last month (The Telegraph).

Alibaba breezed past Wall Street’s profit forecasts with its fourth-quarter results as it said that it would take a stake in its digital payment partner (The Times £).

Wine production in the French region of Bordeaux shrank 40% last year, the Bordeaux wine council said on Wednesday, with severe frost sapping yields in a year that nonetheless produced a good vintage (The Guardian).