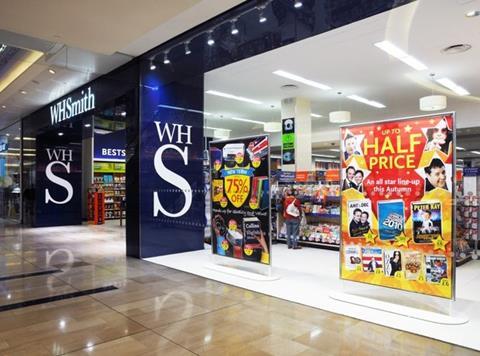 There are plenty of grocery and fmcg stories for the papers to get their teeth into this morning.

Sales fell flat at WH Smith after lacklustre sales of spoof humour books, such as Ladybird’s Book of The Hipster and Five on Brexit Island, failed to deliver festive cheer for the retailer, The Telegraph reports. The bookseller and stationery chain said in the absence of a big new literary trend, sales at high street shops open for more than a year were down 4% in the 20 weeks to 20 January, The Guardian notes. The Mail flags that WH Smith’s motorway services and train station stores saved the day for the retailer. Total sales in travel were up 7%, with like-for-like sales up 4% over the period. The Financial Times points out that the 190-year-old company had for the past two years surprised analysts with strong Christmas performances as a craze for adult colouring books boosted it in 2015 and demand for literary parodies such as the Ladybirds for Grown-Ups series and Enid Blyton’s Five on Brexit Island helped in 2016. “But for Christmas 2017, WH Smith had nothing like this,” the paper writes. The Times says the decline in the popularity of spoof books was no laughing matter for WH Smith over Christmas. Lex in The Financial Times examines the prospects of WH Smith and SSP Group, which have shared a CEO in the shape of Kate Swann. “Seasoned FTSE 250 boss Kate Swann clocked up a decade at UK newsagent WH Smith before moving on to SSP, the world’s second-biggest concession caterer. She was right to swap books and pens for sandwiches. The two companies both published a set of tolerable results this week. But SSP has the better long-term prospects.”

Fever-Tree’s track record of fizzing ahead of City forecasts shows no signs of stopping after the tonic drink maker delivered its 12th profit upgrade since listing in 2014, The Telegraph writes. The owner of the posh spirits mixer brand expects sales of around £169m in 2017, compared with £102m in 2016 (The Financial Times). UK sales have soared 96% in the year. The Times adds that Fevertree Drinks was “breaking out the bubbly of a different kind yesterday” as it announced that it had overtaken Schweppes as the biggest-selling retail brand of mixers.

Cocoa-infused gin advent calendars and a new no-sugar milk chocolate range helped lift sales at Hotel Chocolat over the festive period, The Telegraph reports. The upmarket chocolatier, which makes 40% of its annual sales in the run-up to Christmas, posted a 15% rise in sales for the 13 weeks to 31 December. The Times writes that advent calendars hit sweet spot for Hotel Chocolat over Christmas.

Tesco has poached a senior RBS executive to head up its banking arm, in a coup for the company better known for its supermarkets (The Telegraph). Gerry Mallon has resigned as chief executive of RBS’s Irish lender Ulster Bank to take the helm at Tesco Bank towards the end of July. Mallon, who is also chairman of the Irish Football Association in Northern Ireland, will take over at Tesco Bank from Benny Higgins, who said last year that he was stepping down after a decade in charge (The Times).

Marks and Spencer shares came under pressure yesterday as the retailer grappled with dwindling demand for clothes and the higher cost of food, a market update in The Times reports. Credit Suisse downgraded M&S from “neutral” to “underperform”, lamenting an “uninspiring” quarterly update this month and cutting its target price from 370p to 285p.

Strong global chocolate sales from Barry Callebaut, the Swiss chocolate maker and cocoa processor, brought some relief to cocoa traders who have been watching the commodity trade at near ten-year lows for the past year, The Financial Times writes. The Swiss group said three months sales to the end of November grew by 8% compared to the same period last year.

Strong sales growth at JD Wetherspoon, boosted by an experiment in selling pizzas, has led the pubs operator to raise its outlook on profits (The Financial Times). The pub group reported solid sales growth in the three months leading up to 21 January, with total sales up 4.3% on the year before (The Mail).