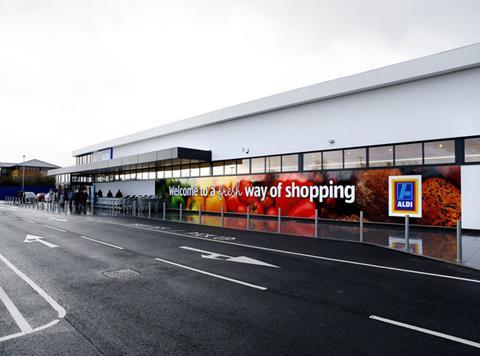 Aldi’s annual results, with record sales but a hefty profits drop, falls under the media spotlight this morning. Aldi’s operating profits in the UK and Ireland slipped 17% last year to £211.3m even as sales notched a fresh record, in the latest sign of the intense competition in the supermarket sector, The Financial Times reports. Aldi, which now has 726 stores across the UK, grew sales by 13.5% in 2016 to a record £8.7bn, after attracting one million new shoppers, The Telegraph adds. The grocer never discloses its like-for-like sales — a key measure in the industry — but said they remained “positive”, The Times writes. The Guardian notes that the discounter’s determination to keep prices lower than rival supermarkets continues to dent profits, with a third year in a row of a declining bottom line. The Mail focuses more on the positive aspects of the results, reporting that Aldi plans to open another 70 stores this year – and 274 more in total over the next five years – as bargain-hunting British shoppers send UK sales above the £8bn mark for the first time.

A rebound in the pound has spurred a rush among businesses, funds and individuals to buy insurance against a future bout of weakness in the currency as uncertainty clouds Brexit negotiations, The Financial Times notes. Retailers and food companies are among those buying insurance against sterling’s moves.

Unilever has bought into the South Korean skincare market with the €2.27bn acquisition of a majority stake in personal care group Carver Korea, The Financial Times writes. The Telegraph says it is the latest sign that the consumer goods giant is turning its focus towards its personal care division rather than its food business. Unilever’s biggest acquisition in six years is the latest sign of a strategic shift after Kraft’s failed bid, The Times adds.

The number of distilleries in the UK has risen by a fifth in the last year to 131, according to a new report by accountancy group UHY Hacker Young. It is double the number that existed in 2012 and is, in large part, due to the sudden popularity of artisan gin, Sky News notes.

Kingfisher beer boss is looking to a new brew to pep up sales, The Telegraph says. The launch of an Indian pale ale will join the growing range of global brews it sells in a bid to appeal to a younger audience.

US retail giant Target is raising its minimum hourly wage for its workers to $11 starting next month and then to $15 by the end of 2020 in a move it says will help it better recruit and retain top-quality staff and provide a better shopping experience for its customers (The Guardian).

The Telegraph reports on the £6bn race to find cures for food allergies.

China’s yoghurt sales are poised to overtake milk for first time as the popularity of the product, seen as slimming and healthy, bails out slowing milk sales, The Financial Times writes.