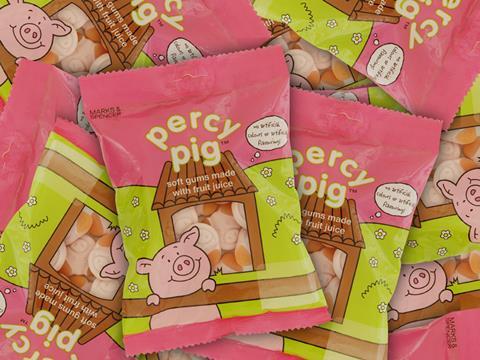 UK ministers should spend an additional £1bn a year on the “nutritional safety net” to combat obesity and hunger after coronavirus compounded the deadly effects of poor diet, according to a government-commissioned report by Leon co-founder Henry Dimbleby (The Financial Times £).

Up to 1.5 million more children in England should get free school meals to help tackle a growing crisis of food poverty and unhealthy eating, the report, billed as the first national food strategy since war rationing, also says (The Guardian).

Dimbleby attacked M&S in the scathing food report, The Times (£) writes. In the report, commissioned by the government, he accuses food companies of making “wilfully misleading” health claims and singles out M&S’s Percy Pigs sweets as an example.

“I just think that is not right. I think that is genuinely misleading,” Dimbleby said at the launch of his National Food Strategy (The Guardian).

The pandemic also exposed Britain’s vulnerabilities, according to the report (The Guardian).

Household food waste in the UK has increased by nearly a third as coronavirus lockdown restrictions have been eased and could spiral further, new research by Wrap has warned (The Guardian).

Reckitt Benckiser’s half-year results get picked up widely this morning. The coronavirus pandemic will lead to lasting changes in people’s behaviour, RB said yesterday after revealing a surge in demand for Dettol and Lysol disinfectants had helped to drive an increase in its sales (The Times £).

The owner of Nurofen and Durex raked in £6.9bn of sales over a six-month period, with sales of its hygiene products soaring 16.1% (The Telegraph).

The demand for RB products has driven a rise in the share price of 27% since the start of the year, when many other companies have seen their market value fall (The Mail).

Alistair Osborne says in his business commentary that RB boss Laxman Narasimhan couldn’t have dreamt of this. “The new Reckitt Benckiser boss has got himself a pandemic. What better for his “relentless pursuit of a cleaner and healthier world”?” (The Times £).

The Financial Times (£) Lex column says the results are a “flash in the pan”. “Timing has helped earnings to rise, but next year is looking less upbeat,” the paper writes.

The closure of its shops during the pandemic lockdown has driven Greggs to its first loss since it was listed on the stock exchange in 1984 (The Times £).

Greggs has asked its banks for extra financing as the UK bakery chain prepares for the risk a rise in Covid-19 infections later this year leads to another lockdown (The Financial Times £).

The boss of Greggs warned it could be forced to cut jobs after the end of the taxpayer-funded furlough scheme unless there is a sharp recovery in customer demand (The Telegraph).

The bakery chain will slow store expansion and roll out ‘click & collect’ and delivery services to boost sales as lockdown pushes it to first half loss (The Mail).

Coverage of Amazon’s new assault on online grocery shopping continues. The Times (£) quotes Waitrose boss James Bailey warning Amazon has pressed the “nuclear” button with its free deliveries and is now at war with supermarkets.

A separate analysis in The Times (£) writes that free Amazon Fresh deliveries will shatter rivals’ hopes of turning a profit.

McDonald’s quarterly profits sunk to their lowest level in 13 years as the pandemic forced the closure of thousands of its restaurants (The Financial Times £).

B&M European Value Retail issued an unscheduled trading update yesterday in which it forecast that its earnings would beat analysts’ expectations (The Times £).

Delivery Hero, the world’s biggest takeaway delivery firm, has hinted at a swoop for one of Just Eat Takeaway, Uber Eats or Deliveroo in a fresh assault on the UK market (The Telegraph).

John Lewis has appointed Nikki Humphrey as new HR boss as fears grow over a wave of job cuts (The Telegraph).

Ending the furlough scheme in October is a “mistake” that will cost 1.2 million jobs this year, the National Institute for Economic and Social Research has warned (The Times £).

Selfridges has told staff that it plans to cut 450 jobs and has warned that annual sales will be “significantly less” than last year (The Times £).

The move by Selfridges is the latest UK jobs carnage with the tally of layoffs now above 66,000 since the coronavirus crisis began (The Mail).

Retail sales have recovered to their highest level in more than a year, according to the CBI (The Times £).

Caterers of funerals, weddings, corporate conferences and other events have been left out of the Chancellor’s £4.1bn tax cut for the hospitality industry, official guidelines suggest (The Mail).