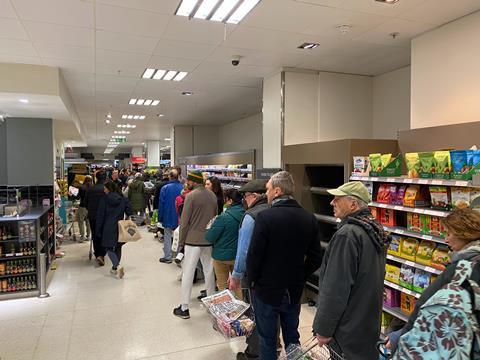 Tesco is expected to press ahead with a £550m dividend for shareholders this week. The supermarket giant is likely to post a rise in annual profits from £1.56bn to £1.85bn on Wednesday, as boss Dave Lewis prepares to bow out after six years in charge. (The Daily Mail)

As the UK’s biggest grocery group, Tesco will have benefited and will likely continue to see higher demand than usual as cafes and restaurants are shuttered during lockdown. (The Daily Mail)

Thousands of jobs are at risk this week as some of the high street’s best-known retailers face administration and others prepare to close swathes of their stores permanently (The Times £). Struggling High Street stalwarts are facing a crucial week, with retailers Debenhams and Cath Kidston both teetering on the brink (The Daily Mail).

Sir Philip Green’s Arcadia Group is preparing to dump a huge number of stores as retailers fight for life amid the coronavirus crisis, with Debenhams teetering on the brink of administration. (The Times £)

Fashion retailers and their suppliers are braced for a massive shake-out of the industry as an estimated £10bn of clothing piles up in warehouses during the coronavirus lockdown (The Guardian). Billions of pounds worth of clothing is being prepared for a huge ‘liquidation sale’ (The Daily Mail).

Struggling retailers focus their efforts online, but profit margins are thin. Retailers with closed stores are having to focus more on selling on the net. Can they survive a cash crunch? (The Telegraph)

Consumer confidence in the UK crashed in March to its lowest level since the financial crisis as government measures to prevent the spread of coronavirus fuelled fears over personal finances and the health of the economy. (The Financial Times £)

Sainsbury’s is banning couples from its stores as part of efforts to enforce social distancing (The Guardian). Sainsbury’s has said that it will start to ease some restrictions on the quantities of items shoppers can buy (The BBC).

Supermarkets have been unable to get the names of 1.5 million vulnerable people being shielded from coronavirus to deliver food boxes because of EU data protection rules. (The Telegraph)

Ocado’s customer service ratings have collapsed in the past month as shoppers get frustrated with delayed deliveries and product substitutions, according to analysts. (The Daily Mail)

Ocado chairman and former M&S boss Lord Rose has called for a national effort to mobilise tens of thousands of British workers to prevent seasonal fruit and vegetables rotting in the fields. (The Daily Mail)

‘I hope people remember the good guys in this crisis’ says Co-op boss Steve Murrells who praises staff at the centre of the coronavirus fightback. (The Daily Mail)

Groceries from the dry-cleaner? UK firms switch to food delivery as small businesses adapt to Covid-19 shutdown by helping to keep home larders stocked. (The Guardian)

The low-paid, young people and women are likely to be the hardest hit by the coronavirus shutdown of businesses including restaurants, hotels, pubs, retailers and transport services (The Guardian). A union organisation has warned against rising poverty as a report suggests the young and low-paid will be worst affected by business shutdowns during the coronavirus crisis (Sky News). Young workers and the worst paid are the most likely to be affected by the closure of businesses amid the coronavirus lockdown, a study says (The BBC).

London’s biggest property owners have warned the chancellor of the risk to financial stability if banks and lenders are not urged to show flexibility towards landlords that don’t receive rent during the pandemic. (The Times £)

Countries follow consumers in stockpiling food, writes The FT. “Countries like Algeria, Morocco and the Philippines have stepped up efforts to top up their grain reserves as big producers including top wheat producer Russia and the world’s third-largest rice exporter Vietnam imposed restrictions on overseas sales.” (The Financial Times £)

‘Hung out to dry’ British brewers fearing for their futures. Many breweries don’t have licences to can or bottle beer and so don’t have the option to fall back on deliveries. (The Telegraph)

The respiratory pandemic sweeping the world has lit a fire under smokers, sending them rushing out to stockpile cigarettes, nicotine patches and gum to keep their cravings at bay. (The Financial Times £)

PZ Cussons has stripped its boss of retirement cash after they found his behaviour had not been up to scratch while he was in charge. (The Daily Mail)

Luckin Coffee on Sunday apologised and pledged to strengthen controls after an internal investigation found hundreds of millions of dollars of alleged fake sales last year, wiping about 75 per cent off the company’s market value (The Financial Times £). Shares in Luckin Coffee have slumped after the company said one of its top executives and other employees had faked sales figures (The BBC).

Escalating demand should benefit Cranswick, which supplies food products to retailers including staple items such as chicken, bacon and sausages. The FT writes that the group is exposed to all of the “big four” UK grocers and leading discounters. And that surge could be sustained — at least in the short term. (The Financial Times £)