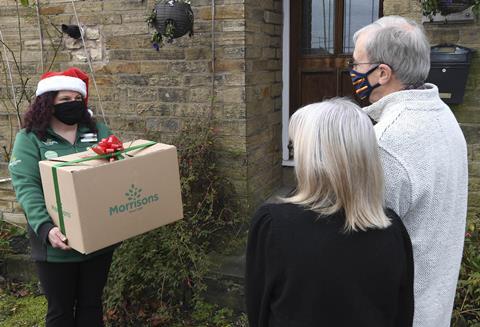 Strong demand for luxury Christmas favourites helped to drive an 8.5% rise in sales at Morrisons over the festive period, as the chain kicked off reporting on what is expected to be a bumper trading period for supermarkets (The Guardian). Sales at supermarket group Morrisons over Christmas and New Year jumped as customers weary of pandemic restrictions splashed out more than usual on festive treats (The Financial Times £).

The boss of Morrisons has launched an open call for British food entrepreneurs to contact him after saying that the pandemic and Brexit has increased the importance of national food security. (The Times £)

Morrisons has become the latest company to pledge support for the vaccine rollout, with three of its car parks to host inoculations and dozens more being made available to the Government (The Telegraph). Morrisons said some of its car parks will be used to help with the roll-out of Covid-19 vaccines as it unveiled rising sales during the festive period (The Daily Mail).

The FT’s Lombard column writes: “The company’s latest update shows how Mr Potts has delivered many of the promises made by his predecessor, who could never square how to sell special occasion luxuries while keeping average prices low enough to compete with the German discounters Aldi and Lidl.” (The Financial Times £)

December was the biggest month on record for British supermarkets as shoppers spent nearly £12bn stocking up on cheese, fresh fish and pork for a very unusual Christmas (The Guardian). British supermarkets enjoyed their busiest month on record in December as shoppers splashed out nearly £12billion on champagne, salmon and other festive treats (The Daily Mail).

Supermarkets will be lockdown winners yet again, writes Ben Marlow in The Telegraph. Supermarket bosses may worry about their image, but £11.7bn worth of sales in December is likely to steady the trolleys. (The Telegraph)

The food and drink industry has raised serious concerns about the new EU-UK trade deal because businesses face punitive tariffs on goods from the bloc processed at British distribution hubs that are re-exported to member states. (The Financial Times £)

Firms in those sectors of the economy hardest hit by stringent new lockdown measures will receive grants of up to £9,000 in a £4.6bn Treasury package designed to keep them afloat to the spring (The Guardian). Businesses in the retail, hospitality and leisure sectors will receive up to £9,000 in one-off grants to help them through latest coronavirus restrictions, the chancellor has said (Sky News).

Pubs, restaurants and breweries in England have given a lukewarm reception to Rishi Sunak’s offer of grants of up to £9,000 to help them survive until the spring, warning the financial “sticking plaster” will not stave off closures in the long term. (The Guardian)

Nils Pratley in The Guardian writes: “The modest grants offered in Tuesday’s measures are unlikely to change calculations for many small pubs, restaurants or events companies. Faced with a new lockdown, they will be asking whether it is worth trying to hang on until the spring if rates relief and furlough support could disappear in March and April.” (The Guardian)

Edamame bean salads, sandwiches and turkey tortillas have been the first victims of Brexit disruption after some of Marks & Spencer’s fresh food was held up from reaching its French shops. (The Times £)

Britain is on course for its first double-dip recession since 1975. The third lockdown, much stricter than the second and more like the first with schools shut once again, will cause the economy to contract by up to 3.5% in the first quarter of this year, according to economists’ early forecasts (The Times £). The UK faces plunging into its first double-dip recession since 1975, with the latest lockdown expected to cost almost £400million per day (The Daily Mail)

A record 500,000 people have signed up to the Veganuary challenge to eat only plant-based foods for a month. The milestone is double the number who pledged to go vegan for January in 2019. (The Guardian)

Veganuary is ‘just a gimmick and casting British industry to the wall’, farmers warn. Farmers are fighting back against calls for people to help tackle climate change by going vegan in January. (Sky News)

Marks & Spencer is closing in on a deal to buy Jaeger, the loss-making fashion brand which fell victim to the coronavirus pandemic late last year. (Sky News, The Times £, The Guardian)

Retailer Marks & Spencer has signed onto a call to action on human rights abuses in China’s Xinjiang region. (The BBC)