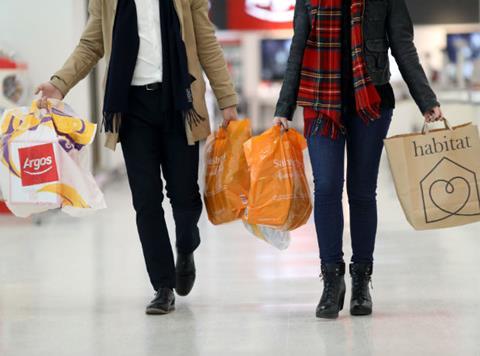 Rising food costs meant consumers had little left over to spend on a festive splurge, industry figures suggest (The BBC). Britons may have loaded up on the turkey and vegetables on Christmas Day as usual but many would have found their stockings lighter than in previous years as spending on food took priority over splashing out on presents (The Times £).

High street spending in the run-up to Christmas increased at the slowest rate since 2012 after spiralling prices forced shoppers to spend more of their earnings on food and essential items (The Guardian). Households devoted more of their budgets to clothing, food and online purchases at the end of 2017 than the year before, according to figures on consumer spending. Two sets of figures published on Tuesday by Barclaycard and the British Retail Consortium show that nominal consumer spending was higher in December 2017 than in the same month a year earlier (The Financial Times £). High street retailers faced a dismal end to 2017 despite Black Friday efforts as inflation-hit households cut back on overall spending and shopped online, figures from the British Retail Consortium and KPMG have revealed (The Telegraph).

Lidl will open five new stores in and around the London area by March and build its largest British warehouse to date in Luton, Bedfordshire, which will create up to 1,000 jobs (The Daily Mail). Lidl is to open a 1 million sq ft warehouse in Luton as it continues its attack on the British grocery sector (The Times £)

Alex Brummer in The Mail writes: “Amazon’s dominance of online shopping is the biggest threat to everyone on the High Street. Only those UK retailers, most notably Next and perhaps Argos, part of Sainsbury’s, which fully embrace the online challenge and manage to integrate it with bricks and mortar have a cat in hell’s chance of prospering.” (The Daily Mail)

After more retail profit warnings to kick off the year, Matthew Lynn in The Telegraph argues retailers must stop their moaning and buy into a radical reinvention (The Telegraph £).

Are Big Brands the next market bubble, asks The FT? It says investors may find their assumptions about consumer packaged goods companies prove costly. “Executives at consumer companies are publicly admitting that they are facing growing disruption, yet equity investors appear to be barely discounting this in their valuations”. (The Financial Times £)

The man who bought BHS for £1 has appeared in court, facing three charges of failing to co-operate with an inquiry into the takeover and subsequent failure of the retailer (Sky News). Dominic Chappell, who owned retailer BHS when it collapsed into administration with the loss of thousands of jobs, failed to provide information about its ailing pension schemes to investigators, a court has heard (The Guardian). The disgraced former owner of BHS failed to hand over vital information to an investigation into the sale of the collapsed retailer, a court heard (The Daily Mail).

Mothercare has seen £29million wiped off its value after revealing that online sales plunged over the Christmas period. (The Daily Mail)