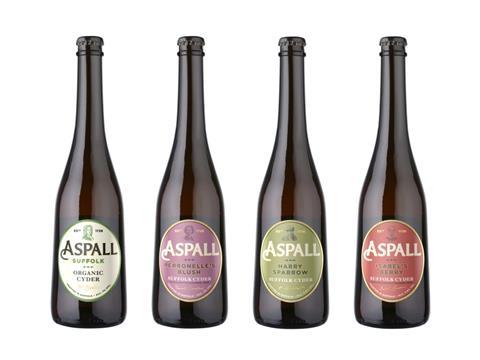 Brewing giant Molson Coors has swooped for family owned Aspall Cyder in a bid to strengthen its position in the fast-growing premium cider category.

The Carling owner said the deal – for an undisclosed sum – supported its portfolio premiumisation strategy.

Molson Coors added that it would use its marketing, distribution and logistics power to grow Aspall in the UK and establish a leading presence for the brand in key markets around the world.

“We’re delighted to add Aspall to the Molson Coors portfolio,” said Phil Whitehead, managing director of Molson Coors UK & Ireland, said. “Both companies share a similar history that is deeply rooted in family, dedication to customers and a commitment to excellence.

“The Chevallier’s have been producing cyder for almost 300-years and their range of brands enhances our existing portfolio. We’re now looking forward to helping Aspall become the number one premium cyder in the UK and building on the huge potential of the Aspall vinegars, as part of an ongoing strategy to premiumise our portfolio.”

Founded in 1728 by Clement Chevallier and run by the eighth generation of his family, Aspall operates from a single site in the parish of Aspall, Suffolk.

Members of the family will remain part of the business and will play a key role in shaping the strategic direction of Aspall, Molson Coors added.

Aspall chairman Barry Chevallier Guild said: “This is an important milestone in Aspall’s long history and a proud day for everyone involved with the company.

“Having been in close discussions with Molson Coors for over a year, we were delighted to find that they share our rich heritage, passion for making quality cyder and vision for the future development of Aspall and its people. Molson Coors is known for respecting the provenance of local brands it has acquired in the past, and has the scale and expertise to accelerate our growth in the premium cider category in the UK and beyond.”

Financial terms have not been disclosed, but the deal is thought to value Aspall at about £40m including debt. Molson Coors also plans to invest further in its operations.

Aspall, which also produces specialty vinegars, will operate as part of Molson Coors UK & Ireland, within the Molson Coors European business unit and will continue to press, ferment, keg and bottle at the Cyder House in Suffolk.

Molson Coors last swooped for a independent brewery back in 2011 when it paid £20m for Doom Bar owner Sharp’s.

McBride (MCB) has issued a profits warning as sales declined and it faced cost challenges across the business.

The group said in a trading update for the six months ended 31 December 2017 that it had started the second half of its financial year with household sales growth prospects significantly ahead of expectations. However, it added that at the same time it is facing weak trading in the European personal care & aerosols division (PCA) and ongoing cost inflation in the near term.

The combination of these factors means that the board now expected full year earnings to be broadly in line with the prior year.

For the first half year, group revenues at constant currency declined 0.6%. Excluding sales from Danlind, which was acquired at the end of September, underlying household revenues were 3.4% lower versus the same period last year, with growth in the UK and south regions offset by ongoing decline in France and the negative impact in Germany of the previously-disclosed major contract loss. This reduction in revenues is now expected to be more than reversed during the second half year.

Trading at the European PCA division has been more challenging in the period and revenues declined 12.1%, approximately half of which was due to deliberate management actions to exit certain customer and product arrangements. As previously stated, we are currently developing an accelerated transformation plan for PCA and will provide more information in due course.

The lower sales levels and a number of mainly external cost challenges, including raw materials, labour market pressures and transportation costs, have impacted the group’s first half profit performance, particularly within PCA, such that adjusted operating profit for the first six months of the year will be lower than the board’s prior internal expectations. The revenue and profit performance of Danlind for its first three months as part of the Group have been in line with our expectations at the time of acquisition.

CEO Rik De Vos said: “Whilst the accelerated growth opportunity we are now seeing is an encouraging validation of the group’s strategy and the positioning of our household business, the immediate task of accommodating such substantial growth presents challenges and choices.

“Despite the near-term margin pressures we are experiencing, we remain focused on delivering our medium-term financial targets and we will re-initiate various efficiency projects once this growth has been absorbed. Additionally, restoring the performance of our PCA business, the plans for which are under consideration, remains a top priority.”

It’s a full on week for the retail sector as the City gets back in full swing after the Christmas break, with at least 20 companies updating the market on their fortunes during the all-important festive period.

Morrisons kicks off the week for the listed grocers tomorrow, along with a third quarter trading statement from Majestic Wine. Kantar Worldpanel and Nielsen will also give their commentary on the Christmas winners and losers as it reveals the market share data for the past 12 weeks. And the BRC/KPMG monthly retail sales tracker will also round off the picture.

‘Super Thursday’ is packed with Tesco, M&S and Waitrose (and John Lewis) unveiling their festive numbers, alongside House of Fraser, Boohoo, Moss Bros, Mothercare and Dunelm.

Booker and B&M finish off the week on Friday.