City news: Sainsbury's sucked into the mire as it posts pre-tax loss 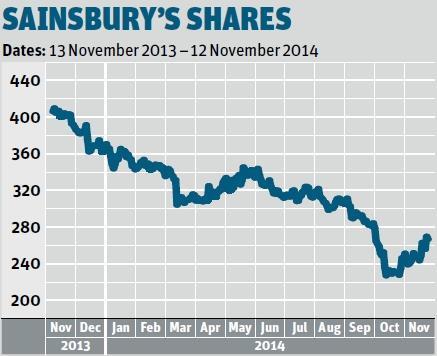 Having once outperformed its peers in the UK grocery market, Sainsbury’s has been sucked into the mire. As well as posting a statutory pre-tax loss of £290m for the 28 weeks to 27 September 2014 after taking an impairment charge of £665m largely related to its property portfolio, it warned profits would be lower in the second half after deciding to invest a further £150m on price cuts.

Though its underlying profit before tax in the six-month period was ahead of analyst expectations, down 6.3% to £375m, analysts warned profits were unlikely to head north any time soon. “We now expect profits to fall this year and next, before levelling off in 2017-18 but it could get worse, depending on what Tesco does next,” said HSBC analyst Dave McCarthy. “Management produced a strategic review which reflects the perilous state of the industry. The future offers falling profits as industry dynamics bite deeper, falling returns as operationally geared supermarkets continue to lose sales, and diminishing dividends as they track falling profits,” he added.

Also on Wednesday, WH Smith gave an update on trading for the 10 weeks to 8 November. It threw up few surprises. Group like-for-likes were down 1% during the period. They fell 4% in its high street stores, but rose 2% in its travel stores.

The newsagent is continuing with its plans to cut costs and improve margins at the expense of sales. The tactic has not gone down well with shoppers - it has been named worst retailer in the UK by Which? two years running - but is delighting investors. Its shares rose 16p on Wednesday to finish on 1223p - up 243p on a year ago.

“With the key Christmas trading period ahead for the high street and travel profits weighted to H2, the business has good momentum, which is encouraging and looks on track to achieve our forecast,” said Investec analyst Nicola Mallard.