Supermarkets slammed over impact of farmed fish on ocean ecosystem 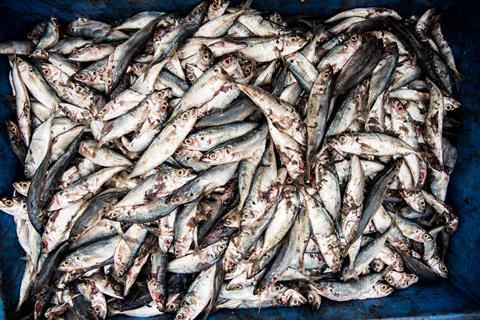 Supermarkets are failing in their responsibility to protect the oceans by promoting unsustainable fish to customers, according to a new report.

Despite “bold claims” about the sustainability of farmed fish products, retailers are not taking sufficient action to reduce the impact on ocean ecosystems, according to research by Changing Markets and Feedback Global.

Farmed seafood like salmon and prawns are often fed on fishmeal and fish oil produced predominantly from wild fish stocks. Almost a fifth of the world’s wild fish catch is processed into feed for farmed fish each year, according to the UN Food and Agriculture Organization.

The report ranked the top 10 supermarkets based on the sustainability of the farmed seafood they sold, with only Tesco achieving a score of over 50% on the scorecard. Seven of the 10 supermarkets received less than 30%. Aldi was bottom of the list.

“Aldi have put a lot of effort into the wild supply chain,” said Jessica Sinclair Taylor, one of the report’s authors. “But what we don’t see is that they have the same awareness over their farmed fish products and how they’re produced.”

Waitrose is also among of the lowest scorers due to limited transparency over its supply chain.

“Waitrose has cultivated an image of sustainability over the years,” said Sinclair Taylor, “but they still have no policy to end their reliance on the use of unsustainable wild fish in their farmed products.”

She is calling on all supermarkets to set time-bound targets for eliminating fish oil from their farmed products, while investing in research to find alternative sustainable feeds.

“All our fish and shellfish demonstrates a high level of traceability and our farmed fish buying policy supports the development of sustainable aquaculture,” said a Waitrose spokeswoman.

“We continue to lead on aquaculture sustainability today with 90% of our fish and shellfish responsibly sourced.”