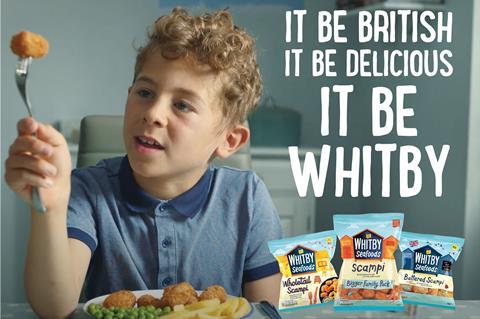 Whitby Seafoods has announced what it claims will be the first TV ad dedicated entirely to scampi amid a sales boom for the seafood.

Starting from next Thursday (15 April) and running for three weeks, the £1m ‘It Be Whitby’ campaign is set to focus on the brand’s Yorkshire credentials and would also champion scampi’s British provenance.

It will appear on ITV1 and ITV2 during shows such as The Chase and Coronation Street, with Whitby particularly targeting Saturday night viewers of the channels who it said made up its core family audience.

The 30-second ad will feature a young boy sitting down to eat scampi and chips with his dad. Upon taking his first bite, the child will suddenly begin speaking in a Yorkshire dialect and will be transported back to mid-century Whitby. It has been made by the brains behind the legendary Marmite ‘Love it or hate it’ campaign, Andy Mcleod, as well as creative agency Lucky Generals, who worked on Yorkshire Tea’s recent campaign.

Whitby Seafoods said it hoped the marketing would harness the power of British seaside nostalgia.

“Our exciting ‘It be Whitby’ TV campaign should remind the nation how much they love Whitby Scampi and chips, and perhaps how much they miss having it at the pub or at the seaside, so it should boost Whitby Scampi sales considerably,” said marketing and sales director Laura Whittle.

“Whitby are the largest buyer of scampi tails in the UK. By getting more Brits to eat more scampi more often we can continue to buy good volumes of tails and support the British fishing effort.”

The supplier also planned to run another campaign in the autumn and winter of 2021, Whittle added.

It follows last month’s ‘category first’ launch by the brand of a new battered scampi product into Morrisons stores and comes amid strong retail sales growth for Whitby’s scampi products as shoppers turned to frozen aisles during Covid-19.