After the Queen, the Costa King of Coffee rides to the rescue

As the BRC was busy unveiling proposals to rip up the business rates system this week, the government and retailers were planning a new rescue effort for the high street that some hope could have just as much impact as tackling the tax burden.

Last week, The Grocer revealed that nearly two years after the first Portas pilots, a new blueprint is to be rolled out by high streets minister Brandon Lewis and his advisers on the Future High Streets Forum. The latest proposals are being spearheaded not by the Queen of Shops but the King of Coffee, Jason Cotta, MD of the Costa Coffee chain. Under his leadership, experts from the forum have been visiting a raft of Portas pilot and town teams, which comprise in total over 400 towns, to assess the local leadership in place, amid concerns that the previous strategy has been far too laissez-faire.

They are now compiling a shortlist of locations from which nine towns will be selected to trial a “simple plan” that the forum, including companies such as Costa, Argos, Boots and Tesco, says contains the “common factors of success”. But what is being proposed and, after the rollercoaster ride of the Portas pilots, is this not going back to the drawing board? 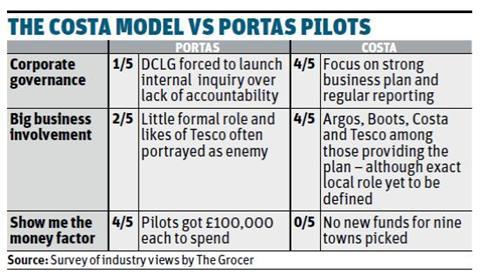 To quote a phrase used by David Cameron recently, the idea hinges on ensuring that towns “have a plan” and one rubberstamped by the latest in national and local thought leadership. Such was the lack of government control over the pilots after their launch in May 2012 that it prompted a secret DCLG inquiry last year over how the £100,000 given to each of the 27 pilots was being spent. In October, The Grocer revealed how Lewis’ predecessor, Mark Prisk, had privately ordered an internal inquiry in a bid to find out where the money had gone and why, in many cases, it had not been spent at all.

In contrast, rather than being a prescription for specific measures such as pop-up shops, market days, or cheap parking, the Cotta model is more from the school of business management. “It’s about having a vision for towns that may be over two, three or five years but which has very clear criteria for success, which will then be reviewed annually,” says one source.

DCLG spokespeople have been tripping over themselves to stress that Cotta’s plans are “not a new set of pilots” and that there will be “no new funding”. Considering the £1.25m of taxpayers’ cash earmarked in 2012 to support town planners overseeing the pilots and town teams on top of the £100,000 apiece already awarded to the pilots, it’s not surprising they are sensitive on the issue.

The Grocer also understands towns shortlisted for the potential injection of ideas will not necessarily be Portas pilot towns or locations judged to have made the smoothest progress since the Portas Review, but towns that have the most potential to demonstrate how the new formula works.

Towns thought to be on the shortlist include Bedminster, Braintree, Dartford, Rotherham and Sydenham, and as well as the extra focus on reporting, there will be another big change in the role expected to be played by local authorities, as well as the retailers themselves.

Since Lewis took over, much debate has focused on ensuring local authorities act as a “backstop” to shore up ideas. Ministers are haunted by incidents such as the walkout by the town team leaders in Margate, which left the pilot in chaos.

Alongside this, the forum has been considering how big business, which has become much more influential in the rescue effort since the early days, can provide data and management support to help smaller traders.

Cotta is overseeing the launch of an “online information resource”, scheduled for September, which will bring together information and guidance and create an interactive forum for all interested towns, not just the chosen nine.

It is also drawing up proposals for a new communications and PR strategy for high streets, which it hopes will “counter the current negative attitudes in the media” and even develop a new high streets brand.

So, following the PR disasters and expensive mistakes, has the government - with a little help from big business - finally got the formula right?

“I think the government has gone full circle and realised that giving groups of volunteers, albeit well-meaning ones, free rein is not a sensible approach,” says Paul Turner-Mitchell, co-author of former Iceland boss Bill Grimsey’s alternative to the Portas Review.

The Cotta plan echoes Grimsey’s vision, he adds. “They have realised, as Grimsey recommended, that towns need proper business plans. Bill’s report revealed that 50% of local authorities didn’t have any plan at all, which is suicidal.”

However, he argues, the timescale of the new plans are too short-term. “The Grimsey Review called for towns to have plans stretching forward over 20 years. You wouldn’t see the likes of Tesco and Sainsbury’s having a two-year plan for their businesses and we need to take the same approach to saving the high street.”

Those involved in the latest rescue attempt are nevertheless hopeful that after the saga of the Portas pilots, they are finally on the right track - and that the nation’s troubled high streets are too.