Aldi comes out the winner in Tesco’s Price Match, but it must catch up in online 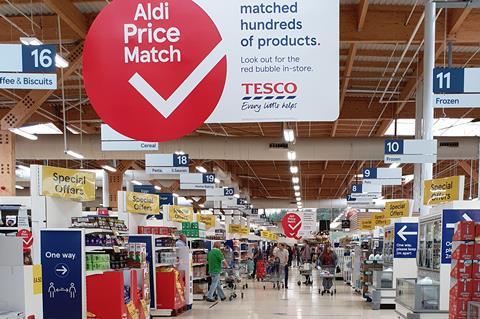 The Tesco-Aldi price comparison a sensible strategy for Aldi, not Tesco

They say there’s no such thing as bad publicity. Take Tesco’s Aldi Price Match. While Tesco appears to be taking aim at the discounter, it’s actually doing Aldi a big favour. Big four shoppers keep hearing ‘Aldi price’ and those who don’t have a nearby Tesco will head to Aldi to take a look.

It’s almost the opposite of the Pepsi taste test. That worked for Pepsi because they were smaller. Forget the taste difference  –  even if Pepsi tasted the same as Coke, a 50:50 test result would still be a win when nine out of 10 of the test subjects drink your competitor. This logic makes the Tesco-Aldi price comparison a sensible strategy for Aldi, not Tesco.

Tesco’s Aldi Price Match is not aimed at Aldi shoppers, though. It is designed to reassure its own shoppers and attract customers away from big four rivals. The price match may concede the victory to Aldi, but it ensures Tesco will be the last non-discounter standing.

Ultimately, though, the winner is Aldi. As it lays down more stores, the maths goes even further in its direction. By following a ruthless focus on simplicity and price, it has got the future in its hands.

Still, if Aldi wants to own the future, it now needs to embrace the data. This sets up a competitive dilemma. The data lies in loyalty schemes, which repulse Aldi because the minute you involve loyalty discounts, you mess with the simple EDLP message that has worked so well.

I get it, but that’s not the end of the story. Automated accurate decision-making needs the driving data, and retail can’t escape it. Lidl has now made its bid for the future with the Lidl Plus app, risking the projection of a slightly more premium image. Aldi needs the data on its shoppers but it can’t and won’t leave the super-hard discounter space open for B&M to drop into  –  or worse invite an entry from, say, Poland’s Biedronka.

Online is also an interesting battleground. The big retailers are killing each other with cheap delivery in a huge online share grab, whilst grocery online share has fallen back to 12% from its coronavirus high of 14%. This is proving to be like the land grab of the 90s, which now hangs like a noose around the necks of big retail. Aldi, which lags in online, shows e-commerce caution announcing click & collect. But this profitable halfway house is not a ‘big data’ play, and it’s not enough.

Aldi’s challenge is to find a way to solve the data void without messing up the pricing proposition. So what can it give shoppers to reward loyalty? One answer could be service benefits, like fast track tills. ABCD is crucial – Anything But Complicated Discounts.