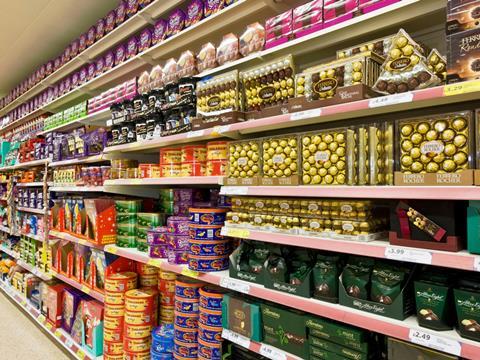 Fresh fears of a global cocoa bean shortage might have spooked suppliers, but shoppers have been treated to cheaper chocolate in the mults this Halloween.

As the chocolate confectionery category again faces warnings of escalating commodity prices amid tightening cocoa supplies, chocolate prices are down 8% year on year on average across 2,922 SKUs in the big five [Brand View 52 w/e 1 November 2016].

Prices for chocolate bars were 6% lower following price cuts on a variety of singles and multipacks. Sainsbury’s took £1 off a pack of seven Twix twin bars, now £1.50, while Tesco knocked 99p from an eight-pack of Kit Kat Chunky, currently £2.

And it’s not just the mainstream brands that have seen their bars knocked down. Prices have also fallen on premium lines such Green & Black’s, with Waitrose slashing 19p off the brand’s range of 100g bars.

Pouches have been the subject of the largest cuts, dropping 15% on average across the mults. Tesco trimmed the price of 103g Maltesers pouch to £1, down from £2 last year, while Asda rolled back the cost of 165g M&M’s pouches in both chocolate and peanut variants, bringing them down by 25% to £1.50 from £2.

Average prices for Halloween-themed chocs were down by 1% and early signs suggest shoppers could treat their family and friends for significantly less this Christmas, with the 319 festive SKUs already on supermarket shelves 15% cheaper than last year on average.

Last month, cocoa processing giant Olam International warned global cocoa bean supplies would fall short of demand by 350,000 tonnes during 2015/16, exacerbating a wide-reaching scarcity of the commodity caused by disappointing harvests in West Africa. The company’s concerns revived worries about a shortage that had dogged makers of chocolate confectionery since 2013, and had prompted them to consider hiking prices or shrinking pack sizes in an effort to maintain profits.

However, while cocoa production for 2015/16 is estimated at 3.99 million tonnes, down 6% year on year, ample rainfall in West Africa over the past couple of months is expected to help production make a strong recovery in the year ahead. Cocoa prices on the London and US ICE markets have fallen 4% and 8% respectively since August on the back of stronger production prospects for 2016/17 [Mintec].

Possibly of more concern for confectionery suppliers is the price of sugar, which in September reached a four-year high on the London and US ICE markets due to expectations consumption will exceed production for the second consecutive year in 2016/17, dragging global ending stocks to their lowest level in six years.