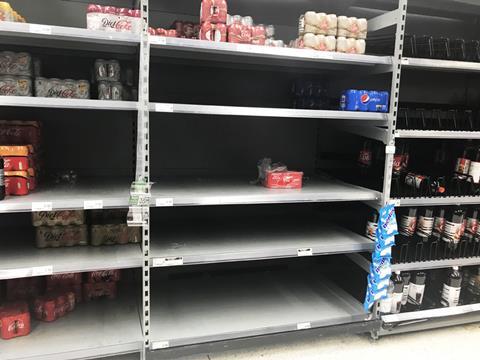 Shoppers have been forced to splash out more for fizzy drinks since the CO2 shortage hit - with big drops in promotional activity leading to a 4% surge in average shelf prices, latest data reveals.

Promotional activity across the soft drinks category has dropped significantly since the crisis emerged in June, with the total number of deals on supermarket shelves plummeting by 63% over the four weeks to 2 July 2018 [Assosia].

Sainsbury’s has slashed its fizzy drinks promotions by 75% over the four-week period, while Morrisons (-69%), Tesco (-65%) and Asda (-33%) also made significant reductions to the number of deals on shelf [Assosia].

Although most supermarkets work on a promotional cycle, it’s unusual to see such a dramatic drop in activity across the board, says Assosia director Kay Staniland.

“With promotional changeover periods following a three-weekly cycle, you would expect individual brands or SKUs within a category to switch around, but not the total category falling in such high numbers.”

It comes amid widespread shortages of CO2 in the UK, which have hit major suppliers including Britvic and Coca-Cola European Partners, though both insist they remain able to supply their brands to the mults.

With supplies of fizzy drinks running low, supermarkets might be cutting back on promotions to limit sales and avoid going out of stock, says Staniland.

“By reducing the number of fizzy drinks on promotion, suppliers and retailers are likely aiming to help reduce volume sales, or at least to stabilise them to avoid shortages of stock.”

The drop in promotional activity on fizzy drinks means more shoppers are having to pay full price for their favourites, which has pushed up average shelf prices in the carbonates category by 4% over the past four weeks [Brand View 4 w/e 2 July 2018].

It follows a surge in shelf prices earlier this year when the sugar tax was introduced, and means soft drinks are now 9% more expensive on average in the major supermarkets than they were last year [Brand View].

“With the summer in full swing and plenty of parties and barbecues hastily arranged for the World Cup - consumers will no doubt have to bite the bullet and purchase fizzy soft drinks regardless of the cost,” says Staniland.

“How long this lasts, and how long consumers will put up with paying full price, is yet to be seen.”