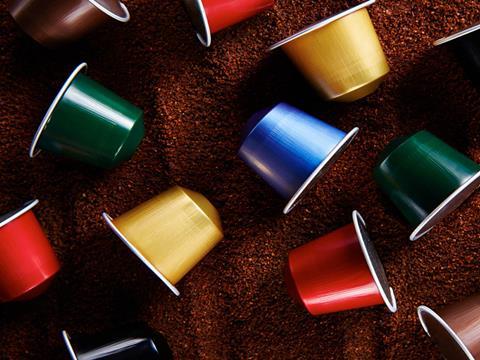 Sales of coffee pods have soared during the past two years, with revenues climbing by 32% to over £190m, according to Kantar Worldpanel [52 w/e 12 August 2018].

At the same time, retail prices for Nespresso and Nespresso-compatible capsules in the supermarkets are also climbing.

While they face increasingly stiff competition from the discounters and the likes of Amazon - which now sells three price-competitive Nespresso-compatible products under its Solimo brand - the average price of branded capsules is very much in inflationary territory.

Nespresso announced a 20p per pack increase on its own capsules at the start of the year, citing currency fluctuations, and the average price of Nespresso-compatible branded coffee capsules in the mults is also up.

Some 43% of the 37 branded capsules sold across the big four and Waitrose have seen price increases during the past four weeks, while the average year-on-year price of branded compatible capsules has climbed by 17p, or 5% across a comparable list of 13 products [Brand View 20 September 2017 to 20 September 2018].

The biggest price increases have involved Cafépod’s coffee range, with shoppers paying some 9.4% more for a box of 10 Cafépod Intense Nespresso-compatible capsules than they did last September. The pods now cost an average £2.90 per pack across the mults.

Of the retailers, meanwhile, Morrisons saw the biggest price increases across its branded pods range, up 37.5% to an average of £2.75 per SKU.

However, not all big capsule brands have been subject to inflation, with Taylors of Harrogate’s pack of 10 Decaffé and Rich Italian capsules both down 24.9% on average, largely due to a long-running buy two for a discount promotion in Morrisons.

On the own-label side, products appear to have largely dodged inflation, with Asda’s capsules remaining at £2.48 per pack since last September and Sainsbury’s products at £2.50, while Waitrose reduced the price of its own range of capsules by 50p to £2.50 three weeks ago.

This compares with an equivalent price of £1.60 per 10 capsules for Amazon’s Solimo range (based on its price of £16 for 100 capsules).

Ultimately, shoppers will “get what they pay for” says Cafépod co-founder Peter Grainger. “There will always be a place in the market for value products, and if it brings more people into the category and creates awareness, then great,” he suggests. “Beers come in the same bottles, but it doesn’t make them all the same. The same with ­coffee capsules.”