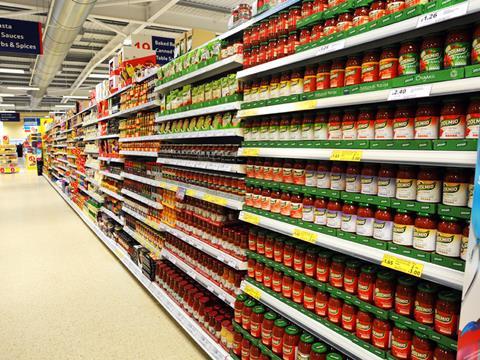 Food prices have begun to rise as the “underlying trend of building cost pressures” hits retailers, despite the latest figures from the BRC and Nielsen showing overall prices were lower than a year ago in January.

Overall shop prices were down 1.7% year on year according to their latest Price Index.

However, they said the figures were probably influenced by January discounting by non-food retailers after a “tepid” Christmas.

Ambient food moved back into deflationary territory after a marginal rise in December, falling 0.2% in January.

Food deflation accelerated to 0.8% in January from the 0.7% decline in December, while fresh food deflation remained at 1.2% for the third consecutive month.

However BRC chief executive Helen Dickinson said the situation was likely to be short term.

“January bucked the monthly trend of an easing in shop price deflation, with prices down 1.7% compared with January 2016 - a larger year-on-year fall in shop prices than the 1.4% fall in December,” she said.

“For now, consumers continue to benefit from falling shop prices year on year. However, fluctuations in the monthly figures belie an underlying trend of building cost pressures that are gradually feeding through from the fall in sterling combined with higher commodity prices. This will inevitably mean that we start to see a general upward trend in inflation over 2017.

The BRC said food price hikes were not reflected in data yet.

“In fact month-on-month food prices were up, although the impact of this on inflationary pressure was offset by the discounting of excess stock by a number of non-food retailers after a tepid sales performance over the festive period.

“Retailers’ focus will be on protecting their customers from the effects of increasing input costs, but with the cost of doing business rising and margins and profits being squeezed, their efforts will require the support of public policies that help them keep prices low for shoppers. This means that capping the annual uplifts in business rates and ensuring no new tariffs remains a core objective of the negotiations on exiting the EU.”

Nielsen head of retailer and business insight Mike Watkins added: “Consumer demand was perhaps better than expected at the end of last year and retailers are still managing to limit currency-related cost increases being passed on to shoppers. This is helping to give some stability to the industry at the start of 2017. However, there is already inflationary pressure elsewhere in the economy and this will start to have an impact on the disposable income of households later in the year.”