Indulgence dominates promotional space in the run-up to Christmas

Confectionery, cakes and crisps: with Christmas just days away, the gondola ends of the nation’s supermarkets are more than ever focused on indulgence.

Eight of the brands in our table of the top 10 biggest promoters are essentially about treating, and seasonal lines have dominated featured promotional space such as aisle ends and pallets over the four weeks ending 8 December.

“With shoppers stocking up in the build-up to Christmas, it’s no surprise we see confectionery, spirits, biscuits, carbonates and crisps & nuts all up,” says Kay Staniland, MD of retail analysts Assosia.

In the case of Mr Kipling, which has run 94 offers compared with 70 in the preceding four weeks, mince pies have been its most promoted lines, accounting for 8.5% of all its deals. And Walkers is focusing much of its attention on sharing bags, with Doritos, Sensations and Extra Crunchy accounting for 45% of offers.

Mars, meanwhile, has continued the surge of activity The Grocer reported last month, and has run almost three times the number of deals it offered a year ago. Mars bars made up a third of its 458 promotions, followed by Twix (28%) and Maltesers (21%) - with Christmas classic Celebrations appearing way down the list and accounting for less than 1% of deals. In contrast, rivals Cadbury and Nestlé - which are both running slightly fewer promotions than last month and last year - spread their deals relatively evenly across their ranges.

Own-label activity has been restrained - up fractionally month on month and down year on year - but this is likely to have changed by the time this article is published.

Retailers maintain the revenue stream of selling promotional space to brands until as close to Christmas as possible, when they switch some over to fresh products that will make their way into Christmas dinners. “Own-label Christmas deals tend to be more focused on the fresh meat, poultry and vegetables that are purchased much closer to Christmas Day,” says Staniland.

The availability of desiccated coconut continues to be affected by the recent typhoon in the Philippines. Additionally, high demand for coconut oil means producers are sending their product to oil producers rather than millers. As a result, tight supplies and high prices are set to continue. 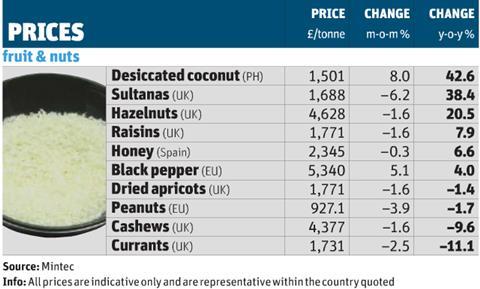 Sultana and hazelnut prices remain elevated because of production problems. Dried grape production in Turkey has fallen due to dry weather during the development of the crop. Additionally, a seasonal rise in demand in the UK has helped support prices. Month on month, however, prices have fallen as buyers have switched to other origins in response to high Turkish prices.

As for hazelnuts, dry weather conditions in Turkey also caused production of hazelnuts to fall earlier in the year. Turkey is the world’s largest producer and exporter of hazelnuts, and due to the much reduced crop, supply is expected to be limited all season.