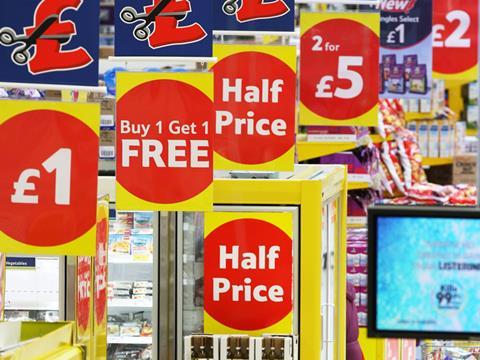 The UK this year saw “the first serious pause in promotional escalation ever” as fmcg brands reduced their reliance on price promotions, according to IRI.

Figures from the retail statistics provider highlight a drop in the proportion of volume sales of fmcg products sold on promotion in the past year - with 49.8% of all food products and 58.6% of all non-food products sold on offer [w/e 13 August 2016]. This marked a decline by 2.6 points to an overall grocery average of 51.5%.

Featured in the new IRI Price and Promotion in Western Europe report, the numbers indicate the proportion of grocery volume sold across Europe on promotion is down by 0.7 points to 28.1% of all fmcg sales. This was a sign suppliers were evaluating whether the high cost of promotions gave them sufficient returns in the form of increased sales and profit, said IRI.

However, shoppers have not lost out. While brands and retailers were generally using promotions less, the offers they made were generally deeper, meaning the overall amount saved by consumers was more or less unchanged.

British shoppers enjoyed an average deal reduction of 26% over the past year. The best offers were found within the personal care and household categories at around 32%, with the least generous being in pet products and alcohol at closer to 20%. The steepest decline in the use of promotions was seen by frozen, which dropped 6.5 points to 49.8%, and chilled, down 4.9 points to 45.1%.

Multibuys dropped off this year from 15% to 12% of all products sold - driven by Sainsbury’s decision to stop running them in their stores this year - but off-shelf display offers have increased and now account for 14.5% of all volume sales. Confectionery brands were the biggest users, selling more than 27% of all sweets in this way.

“Suppliers can’t afford to play the promotion game anymore,” said Tim Eales, strategic insight director at IRI and author of the report. He expected more brands to follow suit and redirect their marketing spend from consumer promotion to advertising and new product development.

Eales added that promotions did not usually drive category value sales growth but merely switched volume between brands at reduced prices. “Consumers are trained to look for deals in store and concentrate their purchasing on promotional events. They do not necessarily generate new sales.”