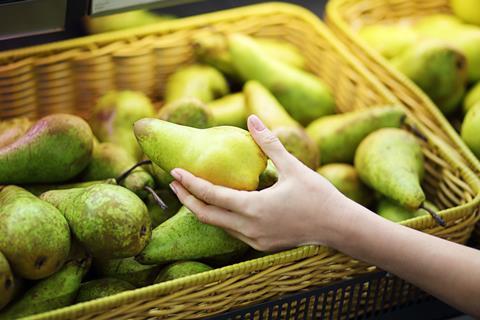 Poor growing conditions were then compounded by hailstorms, followed by drought in the summer months

The price of imported pears has risen by close to a quarter due to the effect of severe weather on the ­harvest in northern Italy.

In the second quarter of 2019, import prices for Italian pears leapt to €1.55/kg, up by 24% compared with the previous quarter, Mintec data shows.

This was driven by an unusually late spring frost, which killed the blossom in the northern Italian region of Emilia-Romagna, where most of the country’s orchards are based.

These poor growing conditions were then compounded by hailstorms, followed by drought in the summer months.

Italian pear production is estimated to have dropped by 30% year on year from nearly 741,000 tonnes to around 500,000 tonnes in 2019. It means overall EU production is likely to be 14% down on last year at two million tonnes.

“The prices for Argentine pears have already reflected the pressure on global production and were up 19% year on year to 43p/kg in the first week of September.”

The knock-on effects of this price pressure are likely to be felt by both the canning and babyfood processing sectors, with the latter particularly affected due to demand for pear purée, suggests Neil Murray, editor of food news at IHS Markit’s Agribusiness Intelligence.

“Australia, Italy and China are all quite big in canned pears and pear purée as well as, to a lesser extent, pear juice.

“Pear purée is quite a premium and lucrative product in the babyfood market where, as you would expect, the standards have to be very high.”

But, he stresses: “I would not expect empty shelves. People hold carryover stock and if all else fails, people can usually buy from China if they need to.”