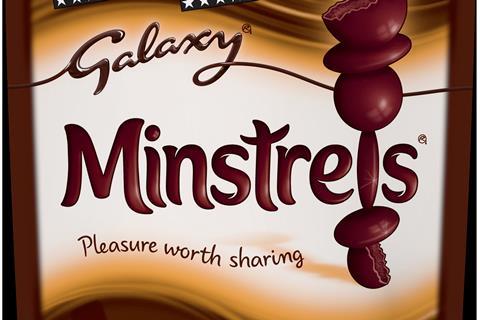 Mars hit the headlines earlier this month as it unveiled new vegan Galaxy bars, made with hazelnut paste and a rice milk alternative. For shoppers gearing up for Christmas, however, the biggest news is that they can now bag a great festive deal on the brand’s confectionery.

Over the past four weeks, it has more than doubled its featured space promotions in the mults from 76 to 162 [Promo Dynamic Brands 4 w/e 24 November 2019]. With an average saving of 38.4%, the deals are 3.9 percentage points deeper than this time last year.

“Mars has started to ramp up its featured space offers ahead of the Christmas period, increasing the number of offers by 113% month on month,” says Assosia director Kay Staniland.

The Minstrels maker is offering the deepest savings of the top 10 biggest-promoting brands, with confectionery rivals Nestlé offering an average saving of 32% (a year-on-year increase of 1.5 percentage points) and Cadbury at 31.5% (down 0.5 points year on year).

Mars has also secured more prominent till aisle deal space than its rivals, with 12.3% of offers compared with Cadbury’s 10.8% and Nestlé’s 9.5%.

“Mars has continued to focus on single product mechanics, which account for 93.8% of its promotions, utilising save for over 86% and half price for 7.4%,” Staniland points out.

However, in spite of the big increase on promotions month on month, Mars has cut deals “significantly” compared to last year, “with a decrease in offers of almost 34%” she adds.

Nestlé and Cadbury’s have also cut the total number of deals in stores compared to last year, by 35.1% and 6.1% respectively.

“The confectionery category overall is down year on year, accounting for only 8.8% of total featured space promotions - a fall of almost 4% on the previous year, but with an increase of 4.5% in average savings,” Staniland says.

She notes that Nestlé has relied “heavily on single product promotions, with 88% of products using save, half price and bogof”.