US sweet potato imports to the UK suffer amid shortages 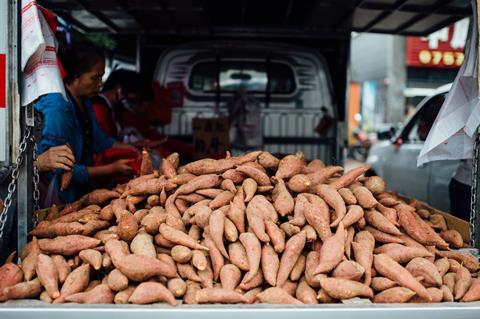 The rough conditions Stateside have led to a 4.9% price rise on US sweet potato imports to the UK

US sweet potato imports into the UK have tumbled in the wake of increasing competition and ­supply shortages across the US East Coast.

Two hurricanes hit North Carolina - which produces 60% of the US’s sweet potatoes - in the second half of 2018, contributing to shortages across the region. US media outlets reported its growers had suffered losses of up to 15% of their crop, with the shortages predicted to last until the 2019 ­harvest this autumn.

The rough conditions Stateside have led to a 4.9% price rise on US sweet potato imports to the UK, breaking the $700/tonne mark to hit $706. This was up from $676 the previous year, according to HMRC data. The UK is the US’s biggest importer of sweet potatoes, making up 35% of its exports [US Census Bureau Trade Data].

HMRC import statistics show the US has dropped three ­percentage points’ worth of market share in the UK since last September - from 71% to 68% of UK supply in March - after scarce supplies and price hikes opened the doors to competition from suppliers in Europe and Asia.

The shortfall was made up by imports from Egypt, which ­doubled its share from 4% to 8% of the UK’s supply. The move came as a show of intent from Egyptian exporters, who dropped prices on their sweet potato crop by 10% to undercut the US product [HMRC].

Despite the recent drop in US imports, sales of sweet potatoes are currently worth £94m annually in the UK, accounting for 5% of the total potato market and bought by 45% of British households [USDA].

Demand had quadrupled in the UK during the past decade, said US ambassador Woody Johnson at an event to promote the product in London last week. “We want to help other great American products to be just as successful,” he added.