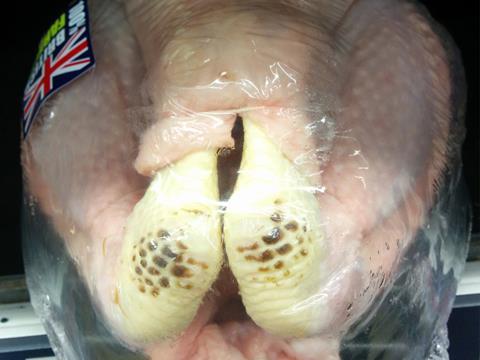 Aldi has apologised after a customer posted a picture of a free-range chicken with hock burn on social media.

Nicola Cooper took to Twitter after finding the damaged bird on the shelves of Aldi’s Carterton store. Hock burn indicates a bird has been sitting in waste, and is not typically found on free-range birds.

Aldi offered no explanation when Cooper initially complained by email, but following her tweet and subsequent social media storm contacted Cooper to offer its “sincere apologies” and vowed to launch an investigation.

An Aldi spokesman added this was an “isolated issue”, which had been raised with the supplier.