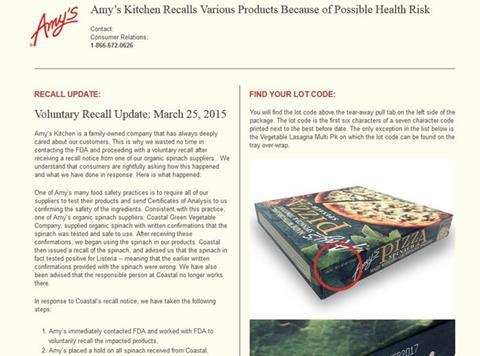 Free-from brand Amy’s Kitchen says none of its products sold in the UK are affected by a mass recall taking place in the US.

The California-based organic ready meal and soup producer said it had embarked on the voluntary recall in America and Canada after one of its spinach suppliers notified them that their product may have been exposed to the listeria organism, which can cause serious infections in young, frail or elderly people and those with weakened immune systems.

The recall, which began on Sunday (22 March), had not impacted any food delivered to the UK, Germany or France, Amy’s Kitchen told The Grocer.

“We chose to respond to the supplier’s notification with an abundance of caution and issued a voluntary recall for a specific set of products shipped to customers in the US and Canada,” said international sales director Damien Threadgold.