Eating dangerously: why we should never be complacent about food 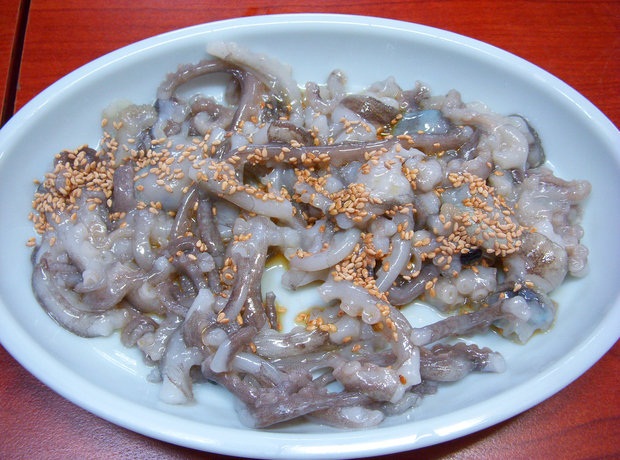 With high-profile recalls for Bisto and products from major retailers like Boots and Asda over the past week, you’d be forgiven for thinking it was a bad week for safe eating.

However, these recalls seem tame compared with the 17 most dangerous foods in the world, compiled into a fascinating infographic by Grace Hartnett, for website MrGamez.com.

Featured among them is the Korean sannakji, an octopus that can be served whole as a baby. Mr Baby Octopus, not a fan of this (or presumably any) method of consumption, is well aware of his impending fate, and will arm the suction pads on his tentacles with the aim of clinging on for dear life.

The issue there, for the consumer, is the thing he often clings to is the throat. Various sources claim an average of six people a year die this way. While the UK has (rather sensibly) banned the dish, GQ suggests you should be able to order it “off-menu” at some Korean restaurants. Don’t do that.

As for the terrifying-sounding blood clam, Google’s top suggested searches related to the Chinese dish are “for sale” and “hepatitis”. Indeed, the delightful cockle carries hepatitis A, E, typhoid and dysentery, and apparently once infected 30,000 people in a single year in Shanghai. Somewhat worryingly, the New York Times recommends that this US-legal aquatic disease bucket, traditionally served raw, is “worth a second look”.

Of course, the fugu pufferfish, star of one of the best episodes of The Simpsons, is the granddaddy of risky eating. In 2015 alone, five people specifically asked for the liver of the fish, which contains the poison tetrodotoxin, a substance far deadlier than cyanide. The gustative equivalent of skydiving, in this case the diners’ figurative parachutes failed to open, and they didn’t live to regret specifically asking to eat a highly toxic substance. Should you wish to indulge, the fish is available in the UK as part of a private, secretive supper club.

Extreme examples like these (no matter how entertaining) may bear little relation to the product recalls we’ve covered over the past few days, but there is a serious underlying point here. The production and consumption of food and drink come with inherent risks attached – risks that need to be managed conscientiously by the industry and communicated transparently to consumers.

How to do this effectively isn’t always clear, however: the current controversies about raw milk and pink burgers illustrate this aptly.

This leads to a sobering thought: culinary thrillseekers that seek out any of the 17 foods featured on the infographic will be well aware of the potential pickle they are getting themselves into – indeed, that is the whole point of eating such foods. Do mainstream consumers always have the same level of insight into the products they consume?