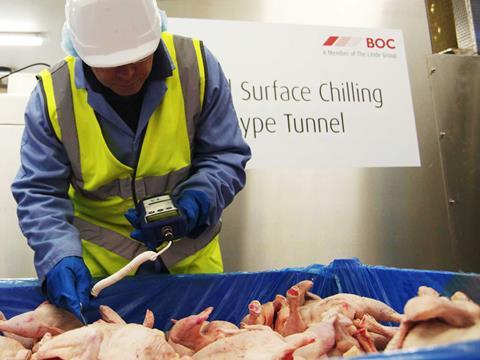 The FSA says it has prevented as many as 100,000 people from falling ill with campylobacter as a result of its campaign to reduce instances of the bug in chickens, saving the NHS an estimated £13m a year.

Figures published by the regulator today revealed that 7% of chickens (sold by the top nine biggest retailers by market share) tested positive for campylobacter within the highest band of contamination for the first five months of the FSA’s third retail survey – from August to December 2016.

The improvement met the original aims of the FSA board, with the top nine retailers representing more than 80% of chicken sales. However, the FSA warned the overall industry had not yet met this target, partly because the smaller independent plants (which tend to supply smaller retailers) had yet to make similar improvements.

“The challenge we set of reducing the number of people who get ill from campylobacter has been achieved,” said FSA chairman Heather Hancock.

“In the absence of any other clear indicators, we can reasonably say that the work that we and the food industry have done from farm to fork has given us this really positive result for public health,” she added.

“But there is more to be done and our focus now is on encouraging the smaller retailers and processors, who generally haven’t met target levels, to follow the lead of the major players. We are considering how we can best help them and monitor their progress.”

In order to better target smaller processors, the FSA was developing plans “that may include targeting specific sites with FSA inspections”, it said. The regulator also confirmed that it would change the way it monitored levels of campylobacter on chickens at slaughterhouse level by ending the monitoring programme in its current form.

It is expected that retailers and processors will also conduct their own research, which will then be verified and published by the FSA. It was tight-lipped on when the new testing format would become operational.

While levels of campylobacter in supermarket-bought chicken have continued falling, the latest results have thrown up one surprise, with M&S seeing a sharp increase in instances of the bug.

The retailer – which has been at the forefront of efforts to tackle campylobacter in the past – saw a steep rise in contamination, with total levels rising from 54.5% of its chickens last year, to 71.6%.

Instances of the highest contamination of the bug (with levels of campylobacter greater than 1,000 colony forming units per gram), fell from 15.2% to 9.5%. However, this figure was still above the industry average.

A spokesman for M&S defended its work to reduce campylobacter. “We’ve taken action over the past two years and now have significantly more chickens that are free of Campylobacter. We’re ahead of the FSA target and will continue to invest to tackle this industry-wide issue,” he said.

The latest survey results were conducted using a new testing protocol, which uses 5-10g samples which are purely neck skin (compared to the 25g samples of neck skin topped up with breast skin used in the previous protocol), due to progress made in the trimming of neck skin by the poultry sector.

The FSA’s survey results were welcomed by British Poultry Council CEO Richard Griffiths. “Yes there is still work to be done, but things are steadily moving in the right direction,” he said.

“It’s sensible for the FSA to be looking at SME’s but from a practical point of view I would question what more inspection could do. The fundamentals of reducing campylobacter surround microbiology, so inspections would have to be very targeted,” he suggested.

“But the key here is to encourage the players who haven’t been involved in previous initiatives to learn from the lessons that small changes can make a big difference over time.”